Around the globe, people eat a lot of bread for breakfast. White bread, whole wheat bread, and more varieties are available. White bread & brown bread are both quite popular, so let’s compare and contrast their many characteristics.

The endosperm of wheat grains is used to make white bread, which is also where the bread gets its color. To make refined grains suitable for consumption, the bran & germ must be removed. Following the removal of the bran & germ, the white flour is bleached with potassium bromate, benzoyl peroxide, or chlorine dioxide.

In other words, it’s a highly processed product created from refined wheat flour that mostly consists of carbohydrates and lacks almost all of the nutrients which are present in brown bread. Manufacturers in certain countries fortify white bread with minerals and vitamins. Wheat bread, without bran, is softer than brown bread.

The brown bread incorporates the whole wheat grain, including the bran, endosperm, and germ. Fiber-rich bran, protein- and carbohydrate-packed endosperm, and vitamin- and mineral-packed germ make up the nutritional profile of a grain. Therefore, it is more nutritious and healthful than white bread since it includes more fiber and minerals.

This is because brown bread uses whole wheat flour that has not been bleached or refined. Since the whole wheat grain is utilized in the baking process, brown bread is also known as whole wheat bread. Due to the bran content, the bread crusts more quickly and is harder than white bread.

Things to know about White bread

Things to know about Brown bread 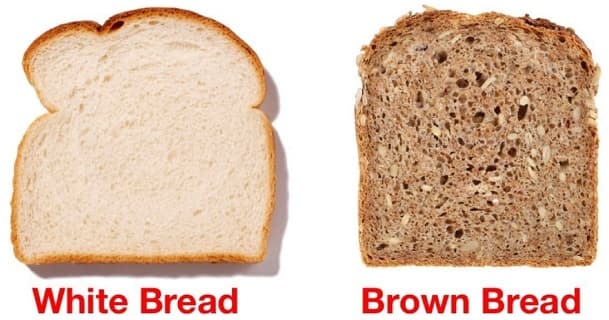 A growing number of people are replacing white bread with brown or whole wheat bread at breakfast as they become more health aware. Yet few people understand the logic behind this healthy assumption or the specific characteristics of brown bread that provide this benefit.

Therefore, most consumers fall for the deceptive advertising claims of firms who add caramel to the white bread to turn it brown.

To better comprehend the distinctions between brown bread & white bread, it is helpful to first examine the components of a single wheat kernel.

Wheat grains can be broken down into their constituent parts: the outer husk, or bran, which is rich in fiber and minerals and vitamins such as phosphorous, zinc, iron, magnesium, B6, B3, B2, B1, and; the inner core, or endosperm, which is composed of proteins and carbohydrates; and the innermost part, or germ, which also contains a good intake of nutrients, minerals, and other beneficial substances.

The only component of the grain that goes into white bread is the endosperm. Wheat goes through a process called “milling,” during which the bran and germ, two of the grain’s most nutritious and fiber-rich parts, are removed. Contrarily, the bran, endosperm, and germ found in brown bread and whole wheat bread make it more nutritional and healthful than white bread.

Most people believe that brown bread is healthier since it has been through less processing than white bread. After the bran & germ have been removed from the flour for white bread, the flour is bleached using chlorine dioxide gas, potassium bromide, or benzyl peroxide.

In addition, several nations require bakeries to add back in minerals and other elements that white bread loses in production. So, it’s common knowledge that white bread is manufactured with “enriched flour” and brown bread with “whole wheat flour.”