The world’s wildlife is its principal natural heritage. As human activity has become more industrialized and deforested, it has become more difficult for animals to survive.

That’s why we have national parks, biosphere reserves, animal sanctuaries, and other protected areas to protect and preserve our country’s natural history. When we talk about a wildlife sanctuary, we’re talking about a place that gives wild creatures a safe haven and ideal circumstances in which to thrive.

However, the national park safeguards the whole ecosystem, including the local flora, animals, scenery, and so on. Finally, protected regions known as biosphere reserves are indeed the ones most likely to keep the species’ plant, animal, bird, and microbe diversity intact.

Read on for an effort at explanation of the distinction between a national park and a wildlife sanctuary.

National Park- To ensure the preservation of a region’s natural resources, cultural landmarks, and fauna

Wildlife sanctuary– The public is welcome and there are less rules to follow.

National Park– Highly secure; no wandering in or out at will.

Wildlife sanctuary– In certain cases, yes, but only so far

What is wildlife sanctuary?

As its name implies, a wildlife sanctuary is a protected area where species such as mammals, birds, reptiles, and insects may roam free. Wildlife refuges are places where wild animals, particularly rare and endangered ones, may go to live out their natural lives undisturbed and help sustain the local people.

Rangers or guardians are sent to the sanctuary to ensure the area is being properly managed. They protect wildlife from human threats including poaching, harassment, and predators.

Wildlife sanctuaries are classified as Category IV protected areas by the International Union for the Conservation of Nature.

What is a national park?

A national park is a protected area set aside by the government to preserve its natural, cultural, or historical resources, including its wildlife and biodiversity. There are millions of various kinds of creatures, birds, insects, bacteria, etc. that call this place home since it is a safe and healthy place for them.

In addition to protecting animals, national parks provide visitors a chance to take in the area’s rich cultural and natural history in a manner that doesn’t disrupt the park’s ecosystems for future generations to enjoy. Planting, farming, grazing, hunting, and predatory animal killing are strictly forbidden, as is the damage of flowers.

National Parks are classified as Category II protected areas by the International Union for the Conservation of Nature (IUCN). Access to National Parks is restricted and requires prior authorization from the appropriate authorities. 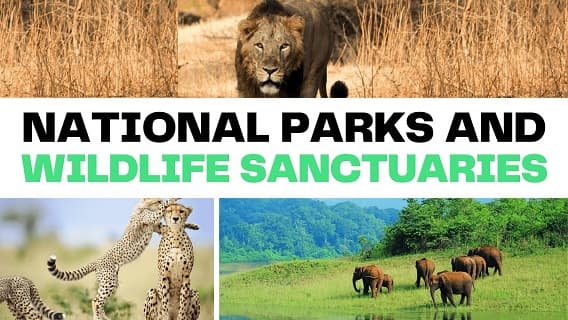 The following are some of the key distinctions between national parks and wildlife sanctuaries: