Jantar Mantar is a major tourist attraction located in old Jaipur city, Rajasthan. It lies between Hawa Mahal and City Palace. Every year people in large numbers come to this place to witness the historical significance and beauty of this place. Due to its amazing popularity, this remarkable monument is ranked to be the top tourist destination in all over India.

There are several other popular attractions such as the Hawa Mahal, and City Palace that lies close to this place. If you are planning to visit this place, then you must definitely need to know some of the interesting facts about this monument that makes this place all the more exciting. 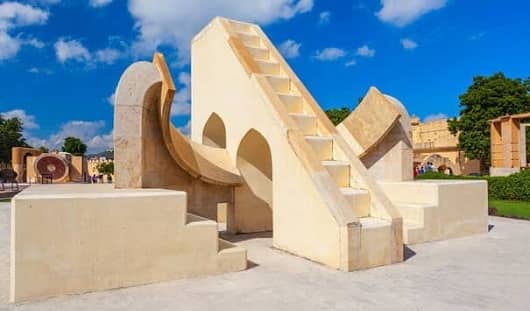 1. This monument is a fabulous compilation of 19 architectural astronomical structures and 17 substructures that were developed by the famous King of Rajput “Sawai Jai Singh II”. He was the founder of this mesmerizing monument and was himself a brilliant astronomer.

2. Another important interesting fact about this monument is that the foundation of Jantar Mantar was laid in the year 1718 AD and it continued for a total time span of 20 years. The entire construction of the monument got completed in the year 1738 AD.

3. The primary objective of constructing this grand historical astrological monument was for the compilation of astronomical tables. It helped in the prediction of the movement and time of the sun, the earth and planets. Using this amazing astronomical tables, people at that time were easily able to predict the occurrence of lunar and solar eclipses.

By timing the earth’s revolution around the sun, they were able to track the location of stars as well. Other important discoveries were to determine the declination of different planets and defining the ephemerides and celestial altitudes.

4. The 19 astonishing structures of Jantar Mantar enabled observers to calculate the position of astrological entities with their naked eye. Due to which Jantar Mantar was considered as a benchmark consolidation of science and religion of that era.

5. The major reason for the development of Jantar Mantar was the heated discussion that happened between Sawai Jai Singh ll and the famous Mughal Ruler Muhammad Shah Zafar in the year 1718 AD.

The entire argument was related to the calculation of the fortunate date when the Mughal Emperor could begin his journey. This led to the creation of Jantar Mantar observatories at five places in the world. These were Delhi, Ujjain, Jaipur, Varanasi, and Mathura.

6. Yantras or structures present in the observatory were constructed out of stone masonry. Limestone was used to plaster them so as to protect their external appearance and give an appealing touch to them.

Some of those instruments got developed with the help of marble and later polished to offer the finest accuracy and finishing. Certain areas of the structures got built by the help of astronomical metal-based scales. They were later filled with the lead element to provide accurate calculations.

7. Jantar Mantar has been recognized with the status of “World Heritage Site” by UNESCO. This monument is safeguarded and maintained by “Archaeological Survey”, a reputed survey body in India.

The Samrat Yantra sundial is considered to be is the largest sundial in the whole world. This sundial has a height of around twenty-seven meters. Accuracy is one of the most important reasons behind the enormous size of Samrat Yantra. It is interesting to know that this sundial offers remarkable precision of up to three seconds. Isn’t it spectacular?

10. You must not be aware of the different names and functions of the structures listed in Jantar Mantar Jaipur

There are fifteen structures present in the observatory, each of them is made to offer distinctive functions to people

Learning about these interesting facts about Jantar Mantar must have increased your enthusiasm to visit this phenomenal place. If you are heading to Jaipur city for a holiday trip, then along with Jantar Mantar you must plan to visit other nearby places like the Hawa Mahal and City Palace in the old Jaipur city.

An excursion through these great monuments will be a unique lifetime experience of witnessing solid geometry and a united astronomical system built to inquire the heavens.