Indian women, though a bit tanned and traditional, score high as far as the beauty quotient is concerned owing to their dark colored hair and expressive eyes. Though, they look good in the traditional dress, they do not fail to impress in modern dresses, too. The benchmark for beauty differs from person to person. The grace and elegance that women have is what makes them beautiful. You also have seen many international beauty contest had won by Indian girls. Recently in 2021 Miss Universe Title is also won by an Indian girl “Harnaaz Kaur Sandhu”.

Here are the 10 Indian Cities with the most beautiful girls have been listed.

Dehradun is the capital city of Uttarakhand and is also known as the Land of Gods. It is on city, where you get to see beautiful yet traditional women. Urvashi Rautela, Who has been selected to represent India in the upcoming Miss Universe Pageant, belongs to this state. When quipped about her beauty, she attributed it to the Pahadi air, meaning the air from the mountains. Dehradun is a city, where the womenfolk value their independence, are fashion conscious and educated. This, along with the pollution free water and fresh mountain air in the Himalayan region could well be the reason for the beauty of women in this city.

Guwahati is the capital of Assam and it is also one of the fastest growing cities in India. Angurlata Deka, one of the most talented and beautiful actresses hails from Assam. Women in this region are noted for their complexion. Their pretty looks and good mannerisms and nature make them even more attractive. The traditional dress worn by these women has all the elements to make them more attractive. They have an awesome figure and straight hair, which add to their attractiveness.

Srinagar is the capital of Jammu and Kashmir. Kashmiri girls are considered the most beautiful. They have a fair skin and an almost blemishless complexion, which makes Srinagar as one of the cities with the most beautiful women. You could attribute their beauty to the pristine surroundings in which they live. Fair complexion and sharp pointed noses and their build make them the women who are a class apart from the Indian women in other states.

Hyderabad is the capital of Andhra Pradesh. The women in Hyderabad usually have a dusky complexion and they bear resemblances to Marathi women. Though, they have a dark complexion, it does not prevent them from entering the list of cities with most beautiful women. The women in Hyderabad are fashion conscious and sophisticated. They have a liking for jewellery and they adorn themselves with fine jewellery that add to their beauty.

Bengaluru is the capital of the South Indian state Karnataka, which has produced many famous personalities, of whom, Deepika Padukone and Anushka Shetty belong to the film industry. Bengaluru is the Silicon city of India and has people from all parts of India, who have settled here for their professional reasons and is a metropolitan city. Bengaluru has always been known for the women, who are fashion conscious. White skin is always equated with beauty. If you go by that, there are quite a number of Kannadigas, who have a fair skin. But again, there is quite a good number of people, who have deep brown shaded skin, which is typical for the Bangaloreans. The dark skinned model from Bangalore, Lakshmi Menon has been chosen for a 12 page editorial spread in Vogue.

Kolkata is the capital of West Bengal. The traditional dress of the women in Kolkata is the sari. The Kolkata girls are adept at mixing tradition with fashion. They are usually dusky and fair both complexioned girls. Famous Bollywood actress like Rani Mukherjee, Madhuri Dixit, Bipasha Basu, Raima Sen and many more from Kolkata are the beauty queens of Bollywood Industry. They are studious and talented and are open about acknowledging cultural differences.

Lucknow is the capital of Uttar Pradesh. It is also one of the major Metropolitan cities. It’s a bustling City and is known for its heritage. Actresses Anushka Sharma, Nandini Singh and Tia Bajpai hail from Lucknow. They are not fair skinned, like most of the North Indians, but still they are very attractive. There are fair skinned women, too.

Chandigarh is the capital of Punjab and Haryana and is home to natural and really beautiful women. Punjab has been described as a heaven filled with beauties. The long hair, tall and petite body structure and the milky white skin combine to make them the beauty, they are. They are graceful and feminine at heart, but are also strong and independent. They are capable of wearing a pants or Patiala, still they exude style. Minissha Lamba, Gul Panag and Chitrangada Singh, who is a Punjabi by origin, are the few women, who stole the limelight in the Hindi film industry, hailing from Punjab.

Mumbai is a city with all kinds of people, the typical Mumbai girl is slightly darker in complexion and every girl has a style and personality of her own. The adaptable nature and cool head of the Mumbai girls make them even more attractive. 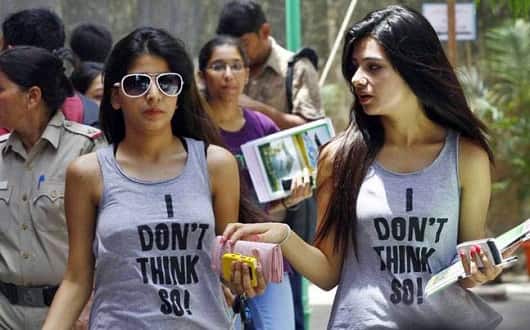 Delhi is the capital of India and you have people from many regions living here. However, a typical Delhi woman is fair like most of the North Indians. They are gutsy and straightforward. They have the charisma and style, which make them attractive.

There are also women in other states like Kerala and Bengal, who are known for their beauty. There are good looking, extremely good looking and average looking girls in all the states. Every woman, who is good at heart, is a beautiful woman.