Coffee is an important agricultural commodity in India. The country is the sixth-largest producer of coffee in the world and is the source of about 2.6% of the world’s coffee. In India the states of Karnataka, Kerala, and Tamil Nadu accounts for the vast majority of coffee production.

The country produces around 3.5 million bags of coffee annually.  The coffee grown in India is of the Robusta variety, with around 80% of production being of this type. The rest is made up of Arabica and other varieties. Robusta coffee is generally considered to be of lower quality than Arabica, but it is more resistant to disease and pests, which makes it easier to grow.

India’s coffee is mostly grown in the shade, which helps to protect the plants from the harsh sun.  The largest coffee producing states in India are Karnataka, Kerala, Tamil Nadu, , Andhra Pradesh, and Odisha. 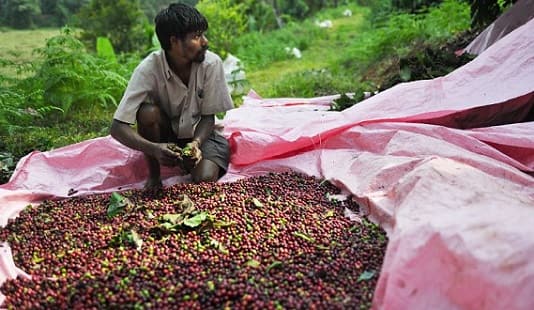 Let’s know about them in detail:

Karnataka is one of the states which is known for producing coffee. It lies in south western part of India. Amongst all the state mentioned in this article, Karnataka stands as the largest coffee producer across India. Additionally, this state alone is responsible for producing around 70% of coffee in India.

Hassan is the most populous district in the state. Coffee cannot grow without copious amounts of rainfall, typically between 100 and 200 centimeters per year. The favorable temperature range, climate, and amount of rainfall in Karnataka are the primary contributors to the state’s high coffee output levels.

Coffee is grown in Kerala, one of India’s most picturesque states, which is located on the southwestern coast of the peninsula. In India, Karnataka was the state with the most coffee production, but Kerala was in second place. It’s fascinating to learn that Kerala is responsible for more than 20 percent of India’s entire coffee production.

In the most recent year, 2021-22, the state of Kerala generated 70,570 metric tons of coffee, making it the state with the largest coffee output in comparison to the previous year whereas in the years 2020-2021, the state of Kerala produced a combined total of 69,000 tons of Robusta & Arabica beans.

In the state of Tamil Nadu, the Pulneys district was responsible for the highest quantity of Arabica coffee production. The Pulleys, the Nilgiris, Salem, & Coimbatore are the most important areas for agricultural production in Tamil Nadu. Arka Suman, Arka Samrudhi, Arka Anoop, Arka Suvidha, Premier, Arka Komal are some famous types of beans grown in Tamil Nādu.

Andhra Pradesh is indeed a state located in the southeast corner of Indian subcontinent that is known for its many rivers. Andhra Pradesh ranked second among the states of India in terms of coffee production, behind only Tamil Nadu. The city of Visakhapatnam in Andhra Pradesh is renowned throughout the state for its “araku coffee.”

In the eastern region of Indian peninsula sits the state of Odisha, which is known for its abundant mineral resources. In contrast to other states, coffee farming did not begin in Odisha until the middle of 1958, but it has since developed into a lucrative crop. In terms of coffee production, Odisha is the sixth most important state in all of India.

Coffee production in Odisha is expected to reach 610 metric tonnes in the fiscal year 2021. Additionally, the state of Odisha produced around 500 + metric tons of coffee in the previous year. Arabica is the variety of coffee that is grown and harvested in Odisha.

The regions of Koraput, Rayagada, Phulbani, & Keonjhar are the most important coffee-producing districts in Odisha. Many individuals who reside in urban areas in Odisha had their lifestyles altered as a result of the coffee industry there. For example, there are many people employed in the nursery growth of coffee plants, the application of fertilizer, and the processing job.