It must be known to all of you that emergency is always said to be the dark phase of the Indian constitution and country at the same time. No people will ever try to remember it in their whole lifetime. During this time, the fundamental rights were suspended and other things related to it was also suspended at the same time.

What is the role of emergency? 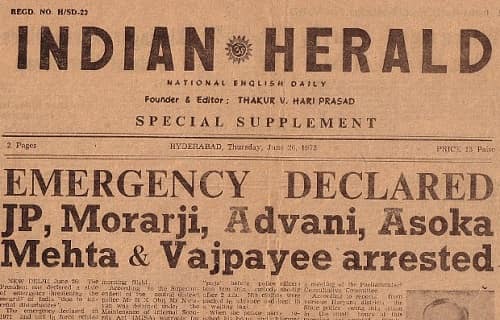 It is known that emergency of India can only be declared under Article 352 of the Indian Constitution. It can only declare national emergency when India’s internal factors are in threat or have some issues. When emergency was declared by Indira Gandhi it was found that a number of opposition leaders were arrested and put behind the bars. As per the reports, the Government allegedly cut the powers supply of the newspapers and other media houses in Delhi. This was primarily done so that no words go out of the place. Everything should be kept secret. However, in the next morning emergency was declared by the Prime Minister through All India Radio. In this case the role of some of the leaders must be mentioned. They played a crucial role that was associated with this.

Jayaprakash Narayan was one of the most famous activist leaders of Bihar. He was one of the persons who conducted and organized a lot of movements against Indira Gandhi for the declaration of emergency. He was the person who fought a lot to throw out corruption from the country. In fact, he was the only person to fight out corruption out of the country to as great extent. On the other hand, he was the only who stood against the decision made by Indira Gandhi. This was a matter of concern for the leaders and they started thinking about it. At some time Jayaprakash became so desperate that he started putting posters in front of Indira Gandhi’s office. The impact of the emergency period was much severe. About one lakh of people were arrested during this period. Most of the opposition leaders were arrested and put behind the bars for a long time. Situation became much more severe at a time. This also delayed the state elections and there were some other issues that were placed during this time. People became much more aggressive.

However, after the emergency period was lifted Lok sabha elections were held and during this time Indira Gandhi lost the election. It happened for the first time. It was the time when a party other than the congress came into force. In the mid term election that was held during the year 1977, it was found that Indira Gandhi faced a huge loss. Indira Gandhi was not accepted to get this result. She was totally shocked with the whole result that took place during this period. Thus, it is now evident that the emergency period appeared to be a big loss for the whole country. It was a big threat for the whole nation at the same time.