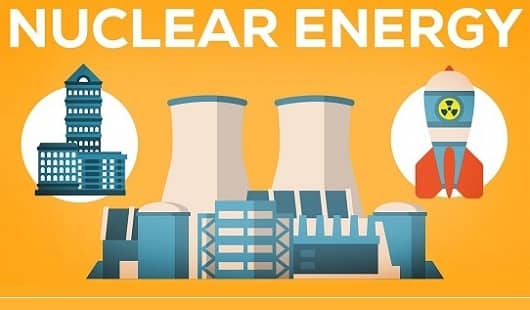 Nuclear power uses uranium and the fact is that it is the unlimited source of energy. Often, nuclear energy is referred to as a renewable source of energy because of the fact that the reactor doesn’t have to be refuelled every now and then. In addition to this, the nuclear fuel serves for many years before there is a need for replacing the nuclear rods in the reactor. Whereas, in a thermal power plant, you need a constant supply of coal and gas to keep the furnace

Nuclear energy is less expensive when we compare it to the traditional thermal energy. While generating nuclear energy, you just need to procure uranium once and then the fuel is sufficient for years. While using thermal energy, you need to procure the raw material on a weekly basis and you also need to maintain a stock of the raw material. This increases the cost of thermal

In the nuclear reactor, water is used to generate steam with the help of the heat generated by the reactor. This steam then rotates the turbines to generate electricity. There is no emission of the greenhouse gases at all. Whereas in thermal energy, there is a generation of many harmful gases and solid residue including fine soot particles which are very harmful.

It is believed that the nuclear fuel generates high-density This means that nuclear energy generates 10 million times more energy when compared to coal of similar weight. This is another factor why nuclear energy is more efficient than any other power plant operating in the world. Because of high energy density, the fuel can be used for a long time.

Let us now talk about the disadvantages of nuclear energy.

While nuclear energy is considered to be the clean source of energy, the fact is that the procurement process of uranium isn’t very clean. The uranium needs to be mined and because of the radioactive nature of uranium, their workers are put at the health risk as well.

Nuclear reactors have become really safe but accidents do happen. The recent example can be of the nuclear reactor in Japan which met an unfortunate fate after being hit by the tsunami. The cooling systems failed and that caused the core to melt down. This meltdown caused a lot of nuclear pollution and it has led to a high impact on the surrounding ecosystem.

The setup cost of a nuclear reactor is much higher than a thermal power plant. In addition to this, a lot of research is required to generate nuclear power. There is also a risk that the countries might use uranium to make nuclear bombs. Hence, this is another disadvantage of nuclear energy.

In addition to this, sometime in future, we might be able to get nuclear fusion reactors which will really change the way we generate nuclear energy.