Have you ever watched space vehicle launch videos or a live broadcast on TV? You may have seen that there are different sizes of space launch vehicles. Some are giant and enormous, whereas some are not. Have you wondered why? 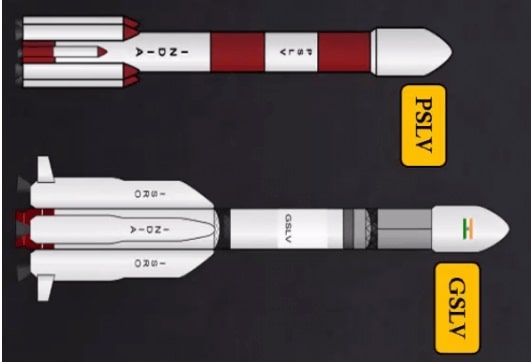 Before getting into the depth of this topic, it would be easy for you to understand the differences based on their specification. Below given are a few key points to remember about both PSLV and GSLV.

Both types of spacecraft rockets have a specific use, as you can learn from the orbit range. GSLV is slightly larger but has a capacity of going way beyond the orbital limits of PSLV rocket launch vehicles.

Uses of PSLV and GSLV

Both types of rockets have a specific use case based on the requirement. And there is nothing better due to the importance of each type for a variety of jobs.

PSLV is used in delivering small satellites, remote sensing observation satellites, and more. On the other hand, the use of GSLV is for large satellites. GSLV delivers satellites into the higher elliptical orbit.

PSLV is versatile for a wide range of purposes like Geosynchronous, Lunar, and Interplanetary. GSLV is also useful, but only to deliver satellites into the Cryogenic Upper Stage or orbit.

Both spacecraft are developed, designed, and engineered in India by ISRO. There are many variants of both types.

If you are interested in learning deep about the work and how everything went, then you can go through the in-depth details on the ISRO website. ISRO stands for Indian Space Research Organisation, and it is one of the leading spacecraft development facilities in terms of efficiency. This organization is run by the government.

Will there be more variants in the Future?

ISRO is working on two different variants of spacecraft, and they are named RLV-TD and Scramjet Engine – TD. There is a piece of minimal information on whether there will be any PSLV and GSLV variants in the upcoming future. Both space vehicles are at their highest load capacity if you consider their weight.

Many researchers claim that PSLV and GSLV share many components throughout the design element. They have many similar things, but the engines are completely different. Even GSLV is also working on cryogenic for propulsion to take things further. UPSC students learning about these differences should remember the details mentioned in the highlight section.

Many reports suggest that ISRO is working on reusable spacecraft technology and trying to focus on burning less fuel for the same job. The making of a space rocket under a budget by this organization is commendable.

Many people ask which type of space vehicle is better, PSLV or GSLV. Well, the answer is quite simple, there is nothing like better. Both rockets have different use case scenarios, different abilities, and functionality also. Based on the efficiency factor, GSLV is highly efficient if you look closely at the fuel consumption in doing the same work at a higher altitude.

Satyakam Pradhan is an Independent Computer Networking Professional from Cuttack, Odisha, India. Satyakam completed his graduation from Bhubanananda Orissa School Of Engineering. He regularly writes topics about technology, gadgets and computer for IndiasStuffs.com