Both instruments have a tall hollow-neck & gourd for a resonating chamber, thus they seem quite similar. The sitar has found widespread popularity in India, Pakistan, and Bangladesh. Pandit Ravi Shankar is largely responsible for spreading this knowledge over the globe.

Rudra veena, Saraswati veena, and Raghunathan veena are just a few of the many names for the veena. This instrument is both a plucked string instrument and a stringed instrument. The construction of a veena may take several forms. Someone who plays the veena well is known as a vainika.

Mysore Doreswamy Iyengar, Chittibabu, Emani Shankara Sastri, Dhanammal, and others worked tirelessly to popularise the veena in the West.

At about four feet in length, this veena is a relatively compact instrument. It has a sitar-like hollow neck that narrows to a resonator (called a “kudam”) at the top.

There are two rosettes affixed to the top board of the resonator for aesthetic purposes. Historically speaking, they were originally crafted from ivory, but modern production practices have led to their replacement with plastic. Each veena has seven individual strings. The 7 strings are all comprised of steel.

After decades of widespread use on the Indian subcontinent, this sitar first gained international attention in the late 1950s & early 1960s thanks to Ravi Shankar. There was a brief fad in the ’60s for the usage of this sitar in Western popular music; artists as diverse as The Beatles, The Doors, and The Rolling Stones all used the instrument on their recordings.

The Indian subcontinent is home to a wide variety of stringed instruments known collectively as the veena (IAST: v). Many different types of ancient harps, lutes, and zithers emerged throughout time. Distinct regions give their versions of the veena different names, like the Rudra veena, Saraswati veena, and Vichitra veena.

The stick zither is a traditional North Indian instrument used in traditional Hindustani music. It features a hollow body & two enormous resonating gourds beneath each end, and its length may be adjusted to the musician’s height and build, ranging from around 3.5 to 4 feet. Four melody strings serve as the primary body of the instrument, with an additional three drone strings serving as accompaniment.

First & second finger plectrums are used to pluck the melody strings while little fingers of the same hand are used to strum the drone strings. The musician’s free fingers are used to dampen the vibrating strings as necessary. The sitar has mostly supplanted the veena in contemporary north Indian performances. The veena is a kind of lute used in South Indian traditional Carnatic music. It features the same long neck as the traditional lutes of north India, but the bottom gourd has been replaced with a wooden pear. 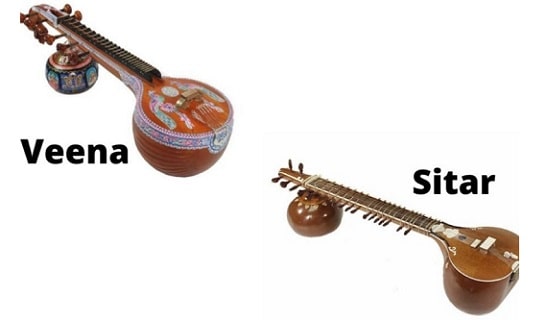 In addition to its strung nature, the sitar is also a plucked stringed musical instrument. Its origins may be traced back to the 13th century. The tritantri veena is the ancestor of the Sitar. It is possible that a sitar similar to Tampura existed during the period of Tansen, the celebrated musician who served in Akbar the Great’s court.

The sitar might have evolved from several Persian lutes used during the Mughal dynasty. Vilayat Khan, Rais Khan, Sharif Khan, and Balram Pathak are only a few examples of legendary Sitar players from the past.

Note that the Sitar has 2 bridges, one huge and one little. A badaa goraa is a huge bridge used for playing & drone strings. The sympathetic strings are played across the little bridge, also known as Chota goraa. Reverberation causes subtle shifts in string length, which gives birth to a wide range of tones.

The veena is played while sitting cross-legged, while the sitar is supported by the player’s left foot and right knee. This allows the player’s hands to be free to move about without strain. Because of this, a sitar is held and played in a manner distinct from that of a veena.

Veena is sacred to Saraswati, the Hindu Goddess of Knowledge. As a sage, Narada is often shown with a veena in his possession. Several classic Sanskrit writings, including the Ramayana and the Mahabharata, refer Veena. This means that the Veena predates the Sitar in terms of its historical use.