In the recent years, we have seen a great boom in the development projects across India, some of the development projects are based on the government based sector and the other ranges in the private sector. PVC pipes are available in the market as different segment, the usage of these pipes ranges in many fields. Some of the main usage of these pipes are in agricultural fields, household pipes to carry water from tanks to flats. The pipe segment of market in India has great standing at International level as these PVC Pipe manufacturers exports large share of their production in International market, the ISO mark as the tag of pipes act as guarantee to offer best available product.

The field is not much advertised on television or through different gateways, so there is no clear information about the best choice available in the market. Here is the list of top PVC pipe fitting brand manufacturers available in India and the choice is based on the usage of these pipes in long term businesses and their durability with best in range.

Supreme Polytubes company is the leading India based company that has earned the tenth spot in the listing, the company has its base in New Delhi with its fortune established in 1973. The company stands as leading PVC pipe manufacturer and also exports these pipes to a different nation, leading pipes are marked as PVC Agricultural pipes, flexible pipes, plumbing pipes and UPVC Pipes. Supreme Polytubes is an ISO certified firm following proper guidelines for the products.

The company was founded in 1962 and stands as ISO certified company with its leading name in the sector of housing pipes in India. The company forms ninth spot in the list of PVC pipe fitting companies, the modern range of pipes is based on best of technology with a different range of usage offered. The range of pipes available is available in different categories as pressure pipes, casing pipes, and column pipes.

The company formed back in 1971 has its base in Andhra Pradesh and commits  to manufacture series of PVC Pipes ranging from electrical pipes and fittings, platinum pipes, SWR Pipes and water pipes. The PVC Pipe manufacturer company offers affordable price range with best ISO certified products.

The Gujarat Based company is ISO 9001:2008 company with an impressive set of pipes available in PVC pipes and fittings with three categories of main pipes as casing pipes, pressure pipes, and column pipes. The company also offers a range of column pipes and also available as the choice for PVC pipe fitting manufactures. The company boasts fitted with Japanese injection molding machines wand German lines.

The recently based company in 2010 has established its great name in the plastic pipes and fittings in India. The company mainly manufactures pipes based on UPVC Pipes and CPVC pipes, brass fitting for homes and range of pipes available for agricultural industries.

Prince Piping Systems has established its name as the most popular India’s PVC pipes available to be exported; the company has won the award of Outstanding Quality products in the Pipe Sector. Series of leading products offered are uPVC plumbing system and uPVC agricultural fittings, the company is leading name as PVC Pipe manufacturer.

Jain Irrigation System is a leading name in the field of PVC Pipes with its popularity not only in India but in different parts of the world, the options of pipes for different categories of usage includes irrigation system, food processing plants, renewable energy sites and much more. The company stands at the third spot in the listing as the PVC pipe fittings companies option available not only in India but at International level. Jain Irrigation System has its reach in mostly India’s state with a durable range of pipes to offer. 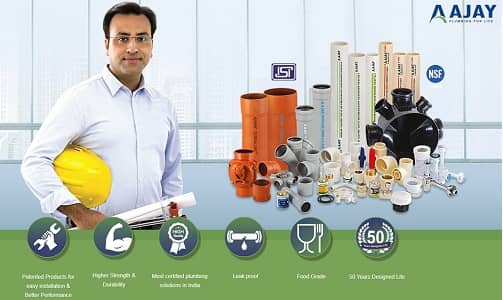 Ajay Pipes is a leader in the Indian pipe manufacturing business. Ajay Pipes has been in business for more than 55 years; the company was founded in 1961. They’ve offered the best piping and drainage solutions in India since then. For example, their patented designs are easier to install as well as long-lasting. This is why Ajay Pipes offers an incredibly long fifty year warranty on nearly all of their products.

What does Ajay Pipes do?

The Deepline column pipes designed and manufactured by Ajay Pipes are ideal for high pressure, high stress conditions. They maximize flow rates and minimize pressure loss. This makes them ideal for industrial applications and commercial water systems. The Deepline brand of pipes by Ajay Pipes are a good choice for irrigation systems, chemical distribution systems and mining applications. Their rugged body is perfect for bore wells, since they help prevent bore collapse. They are much cheaper than conventional ERW pipes. The company also makes handpumps and pipe fittings to connect irrigation pipes to any irrigation sprinkler heads you have on site.

Why Work with Ajay Pipes?

Ajay Pipes is notable for being the most certified plumbing company in India. They aren’t just ISO 9001 and ISO 14001 certified. They also meet the OHSAS 18001 standard, a world class occupational health and safety standard. They’re the only Indian pipe manufacturer certified by NSF International. They’re the oldest UPVC Pipe ISI license holder, as well.

Ajay Pipes relies on multi-local manufacturing and advanced engineering to produce high quality pipes at an affordable price. The company’s headquarters is located in New Delhi, India. The company has a broad network and strong support team to meet the needs of their clients across India.

The International brand is the most known to every household as the company stands as the few companies in the construction sector that opted for the advertisement to lead maximum population. The best-rated pipes offered by the company are available as the choice amongst the fitting as agricultural fitted pipes or industry based fiber pipes that offer durability and strong working parameter against reacting solutions. The company stands still as the top few industries with its reach all over India and also Finolex is the only well famed PVC Pipes manufacturer to the common people. 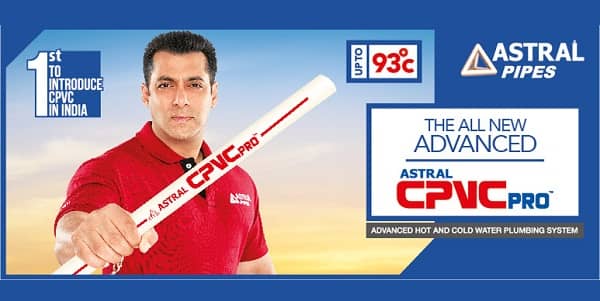 The top of the list Astral Poly Technik Ltd has its base from 1999, the company manufactures pipes in the two biggest segment of its usage as drainage and plumbing based system. Astral Pipes are the best pvc pipes in India available for industrial based appliance and commercial and residential properties based usage. The company has established its name as a pro-customer company and best PVC pipe fitting company.

How To Choose The Right PVC Pipes In India?

What types of PVC pipes do you want?

First of all, you need to learn about various types of PVC pipes which are available in India. You do not have to buy branded or costly pipes in order to get the best ones. You need to check the quality of the material before buying a PVC pipe. You might not know this but there are un-plasticized PVC pipes which are used for cold water systems. If you live in colder regions then you will require plasticized pipes which can last for a longer period of time. For the people who want to get pipes which can withstand higher temperature can prefer getting chlorinated PVC pipes. So make sure to learn about various pipes before buying them to get a convenient installation.

Check the thickness of the PVC pipes

You need to check the thickness of PVC pipes before buying them. This will help you in getting information whether it will provide a good flow of water or not. You can check the diameter of the PVC pipes manually without the help of any tools. The greater the diameter of the pipes are the better it will protect the water system. It can withstand the high pressure and temperature of the surrounding.

Whenever you are buying any product you check their quality in order to get assured about your buying. And such should be the case when you are buying PVC pipes for your house. You should check the materials used for manufacturing of the PVC pipes. This will help with selecting the best pipes for yourself without worrying about anything.

The durability of the PVC Pipes

It is very important that you get details about the durability fo the PVC Pipes. You need to check the average lifetime of the pipes for which it can last. This will help in providing you an idea about the time when you need to get the replacements in your house. You can check the reviews of the company before buying the pipes from them.

Check the ISI mark on the PVC Pipes

Always check the ISI mark on the PVC pipes before buying in order to get assured about their quality and price. Some sellers might try to sell you the PVC pipes without ISI mark at a cheaper price but you should avoid using their services. If you are buying PVC pipes then you can get them at a fixed and lower rate imposed by the government.

To prevent the polymer from degrading while the pipes are being extruded and stored before being buried, stabilizers are employed in PVC pipes. However, after the pipes have been laid under the earth, no chemical deterioration is anticipated to take place. Because of this, PVC pipes installed underground might potentially last for more than a millennium without deteriorating.

Degradation of exposed surface of a PVC pipe may occur over time if it is subjected to direct sunlight. This minuscule layer, measuring around 0.05 mm in thickness, becomes obvious as discoloration (so-called bleaching) over time and ends when surface exposure is no longer present.

The term “permeability” refers to a pipe’s ability to allow a chemical substance to pass through its walls or joints.

Multiple water utilities have looked into this kind of incident and found that PVC pipes haven’t had any big issues thus far.

PVC pipes are versatile because they can withstand a variety of chemicals without deteriorating.

PVC push-fit pipes are not vulnerable to chemical damage in most civil engineering applications. They are resistive to strong acids, alkalis, & surfactants, making them useful in polluted soils or some bad water and industrial systems.

You may use them even when sulphuric acid is present, which is common in sewage systems when something is wrong.

In accordance with the Safe Drinking Water Act of the United States and Canada, as well as other international legislation, PVC pipe fully satisfies or surpasses all applicable health and safety norms and regulations.

The U.S. Environmental Protection Agency and other government agencies mandate frequent testing to assure the product’s safety, and independent organizations like NSF International monitor its usage. As per the experts is safe for use.

The scientific community has debunked the claims that it is harmful. There is no proof that it creates hazardous bio-films, releases organotins, poses serious risks in its production, usage, or disposal, or releases dioxins when water travels through it.