What is Arbitral Award?

Article 52 of the Arbitration Law provides for the provision relating to the binding force of the Arbitral Award. It states that the arbitral award made according to the requirements of the present Law shall be binding on the Parties and shall have the same res judicata effect and enforceability as a Court judgment. 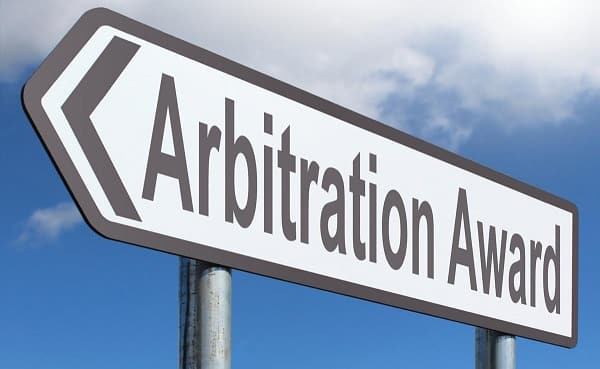 Conditions for enforcement of Arbitral awards in UAE

The invalidity of Arbitration Agreement

No arbitration agreement existed, or such agreement was invalid or forfeited under the Law adopted by the Parties or under this Law.

At the time of the conclusion of Arbitration Agreement, the party was incompetent or lacked capacity under the applicable law.

A Party to the Arbitration was unable to provide a statement of defence due to the Arbitral Tribunal’s failure to observe the principles of litigation or give adequate notice of the Arbitrator’s appointment or the arbitral proceedings.

The arbitration award was not based on the Law as stipulated in the Arbitration Agreement by the parties.

In Petition No. 980 of 2010 (issued on 23 February 2011), the Abu Dhabi Court of Cassation held that it is permissible for the parties to request for the setting aside an arbitral award if such award failed to meet the legal requirements or where the award has been null and void.

The Arbitral Tribunal’s composition or appointment of an arbitrator is in contravention of the requirements of the existing Law on Arbitration or the Parties’ agreement.

The arbitration procedures are null and invalid if the award influenced in any manner or if the arbitral award has passed after the stipulated time had expired.

The arbitral judgement has decided on issues not addressed by, or outside the scope of the Arbitration Agreement. However, only the final of those portions of the award may be null and invalid if the judgement can be separated from those not so filed on issues referred to in arbitration.

In the case with Petition No. 438 of the 23rd Judicial Year (issued on 12 July 2004),it was observed that the Arbitral decision passed must be within the limits of the competence and authority of the arbitrators derived from the arbitration agreement.

In another case with Petition No. 403 of 2003 (issued on 13 March 2004), the Dubai Court of Cassation held that the award not considered invalid because one of the tribunal’s members was out of the country at the time of the passing of the award. If such Arbitrator attended the hearings, participated in the award’s rendering, and signed the original copy of the award presented to the Court of First Instance, such award is valid.

If the arbitral decision contradicts the State’s public order and morals.

In Petition No. 180 of 2011 (issued on 12 February 2012), the Court held that Arbitration did not resolve issues related to the registration of off-the-plan apartments in the Interim Real Estate Register. In direct conflict with public policy, the sole Arbitrator’s award is invalid and unenforceable. As it is an issue of public policy, the Court has the authority to overturn the judgement.

Period for filing of Annulment of Arbitral Awards

Any party seeking to enforce an arbitral judgement must submit to the Court’s president a request for recognition of the award and issue of an enforcement order, provided that the request accompanied by the following:

The purpose of this article is to provide a general overview of the subject. Expert’s firms like HHS lawyers and legal consultants specialized in dealing with cases relating to Arbitration. if you have any questions regarding filing an arbitration request with DIFC-LCIA or if you would like more information about the Arbitration Agreement, contact experts.