Many homeowners are not sure if they should buy a kitchen chimney or if an exhaust is enough to get fresh air in the kitchen and get rid of the odour and smoke. The general notion is that the exhaust can help you in getting rid of the smoke efficiently. Well, is that true? In this article, we are going to compare the kitchen chimney with the exhaust so that you can decide which one is better for you. By the end of this article, you will have all the points of comparison between the two, and you will be able to make a decision based on conclusive evidence. 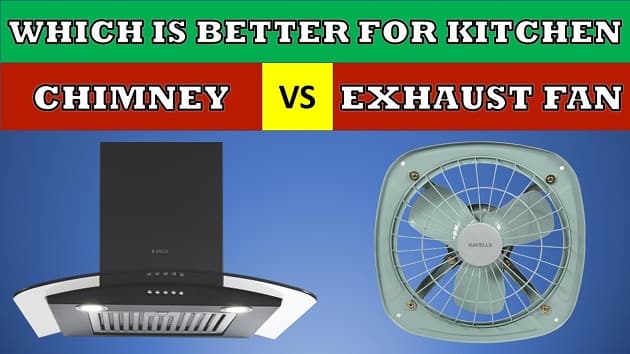 So, let us go ahead and check out these points of comparison, which will help you make the right choice for your kitchen.

The next point on the list is the cleanliness factor. You would agree that the chimney is better at extracting grease and tar out of the air. It has an advanced filtration system that collects all of these things and helps you in filtering the air. The problem with the exhaust fan is that there is no filtering mechanism. The result of using the exhaust is that you will notice grease marks on the walls, and often, soot will stick to the fall. Over time, you would need to clean the walls and the exhaust multiple times to maintain hygiene. Whereas, when installing a kitchen chimney, the cleaning efforts are restricted to the chimney only.

Usually, the exhausts are very efficient in removing odour and smoke. They can displace a large amount of the air. However, the exhausts still can’t compete with the chimney. The kitchen chimney exploits the advantage of covering the entire cooktop, and hence it can remove the smoke very as well as odour very efficiently. The kitchen chimneys with the duct can help you remove smoke and odour, but you might have some issues in removing the gases when it comes to ductless chimneys.

The installation process of the two can vary depending on the construction. Assuming that you already have a duct for the exhaust fan, you may find it difficult to install and clean the exhaust fan. They are usually present close to the ceiling, and you would surely need a ladder to reach the exhaust. Talking about the chimneys, the duct chimneys are slightly tricky to install because the duct needs to be appropriately connected. Once the duct is connected, there is not much that needs to be done. If you have ductless chimneys, then they are the easiest to install.

If you are using LPG or any fuel in the gas stove, then you can be sure that burning fuel will release gases like carbon dioxide in your kitchen. To get rid of those gases, the duct kitchen chimney works the best. The suction power simple sucks all those gases up in the exhaust system and helps you stay safe. If you do not have a kitchen chimney and make something that smokes, then there is a probability that your smoke alarm will also go off. So, to keep your family safe, a kitchen chimney is a must-have in the kitchen.

The electrical efficiency is entirely subjective. It depends on the power consumption of both these appliances. Today, chimneys are very power efficient, and they can keep your energy bills low. In comparison, a high power exhaust may consume more electricity than the kitchen chimney, and it may shoot your power bills. So, it is better to check the power consumption of both these appliances before making a decision.