India’s socioeconomic and geographical diversity led to the adoption of a multi party system. This arrangement would allow for a variety of parties to effectively represent various demographics within society without centralizing power in any one organization. India’s massive cultural and religious diversity inspired the country to adopt this system.

Such a system is the only way to handle a country like India’s massive population. Only a multi-party system could accommodate the country’s many socioeconomic, cultural, religious, and geographical subsets; a single-party system, like China’s, breeds authoritarianism and precludes the possibility of free & fair elections, both of which are crucial to a functioning democracy.

This structure allows for the development of local and regional parties, among other benefits, and ensures that all segments of society are adequately represented in parliament. This structure also prevents any one party from becoming a dictatorship by fostering healthy rivalry among them.

What is a Multi political party system? 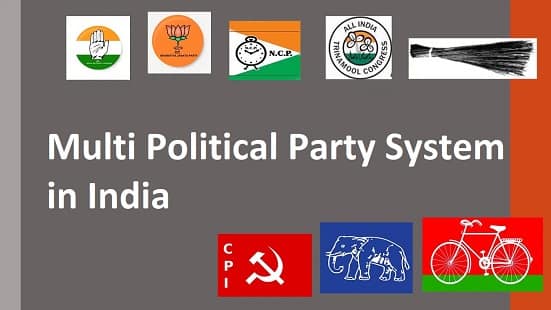 Multiple parties with different ideological backgrounds compete in national elections, and any one of them, alone or in alliance, may win power under a multi-party democracy.

Although both parliamentary and presidential systems may have more than two parties in power, multi-party systems are far more prevalent in nations that employ proportional representation rather than first-past-the-post voting.

There are a number of parties vying for control, and any one of them might reasonably establish a government.

In multi-party systems based on proportional representation, the number of parliamentary seats won by each party is directly related to its share of the popular vote. In a first-past-the-post electoral system, voters choose one candidate from among many candidates in each district.

First-past-the-post voting systems discourage a plethora of political parties and tend instead to favor a two-party system in which candidates from just those two parties have a fighting chance of being elected.

Duverger’s law describes this kind of gravity. On the other hand, proportional representation does not have such a tendency and allows for the emergence of numerous large parties.

In this system, people with different beliefs and values may all have a voice in government. A number of potential applicants are available for consideration.

The only drawback is that there is little chance of a single party sweeping to power. This makes it hard to create a government.