Many countries have laws in place to ensure cattle are killed in a sanitary and humane way before they are used for human food since this is essential to protecting animal health. Contrary to the views of animal rights activists, however, the laws of many countries make it illegal for religious groups to kill animals humanely.

Legally, the phrases ‘kosher’ and ‘halal’ refer to the identical method of ritual animal slaughter observed by Jews & Muslims, respectively, but in common parlance, the two terms are used interchangeably. The Jhatka technique of killing has a long history of use among adherents of the religions of Hinduism and Sikhism in India.

To dispel the myth that Jhatka meat is superior to raw halal meat, we must first define the terms. To put it simply, the Islamic way of slaughter is called Halal, whereas the non-Islamic technique is called Jhatka. The Arabic word halal means “permissible” in English and it denotes compliance with Islamic law. 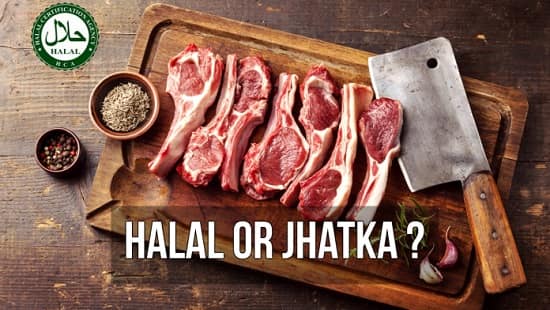 In halal slaughter, the animal is slain by severing its carotid arteries, esophagus, trachea, jugular veins, & vagus nerve with a sharp knife at the ventral (front) region of its neck. To ensure that the spine nervous system is unaffected by the animal’s death, a ventral neck incision is performed.

The devotional text Tasmiya has been recited at this time. Muslims are obligated to eat only freshly butchered halal mutton and are forbidden from eating any meat that has not been ritually presented to Allah.

In contrast, the jhatka slaughter method involves making a cut on the dorsal side of the neck for dislodging the entire spinal column from the skull. This results not only in cervical dislocation but also decapitation in a single strike, necessitating the use of a more powerful sharpened object.

To sum up, Jhatka is a slaughter method in which the animal is put to death with a single blow, rather than having to bleed to death over a longer length of time.

Some locals indeed think Halal is superior, but scientists and doctors aren’t on board with that theory. There is no way to discern whether one has a different diet than the other. Researchers have not looked at the cholesterol levels of those who regularly consume fresh halal chicken and mutton.

Comparing Halal with Jhatka from a scientific standpoint

Normally, when we feel anything in the body (somatic cells), those cells’ cognate receptor proteins pick up on it and send a message through the spinal cord to the brain. Again, the effector muscles of the body show what the brain has decided to do in response.

When an animal is slaughtered according to halal practices, the spinal nerve system is not intentionally interrupted, whereas, in jhatka, it is instantly blocked; as a result, the animal’s sense of pain is lost in the jhatka process by default, whereas in the halal process, the pain sensation is transmitted from the brain even before the animal dies.

Multiple international research groups have produced evidence demonstrating that animals experience significant stress during kosher/halal slaughter method, with levels of cortisol, nor-adrenaline, & dopamine increasing by 30-50% in cows/bulls and 100% in goats.

Because neuronal secretions from the hypothalamus control the production and release of most of the hormones, including all of our stress hormones, this is the case.

Cleanliness is the primary requirement for halal meat. Meat processors and slaughterhouses have a responsibility to ensure that this vital standard is met. Their living spaces will be kept neat and clean as a result of this. They are often able to get their hands on healthy and clean meals. It is not acceptable to kill a sick animal.

When an animal’s head is cut using the jhatka method the blood clots since it isn’t allowed to flow out from the body on its own. Rewashing the meat is necessary because blood clots hasten its spoilage.

This creates rigor Mortis, and the more the meat is kept at room temperature rather than in the fridge, the more probable it is to shrink and stiffen due to rigor Mortis. The technical definition of this is that halal meat is juicier, fresher, and less likely to shrink.

All of them are correct; however, some people may insist that meat has a better flavor if it is prepared in the Jhatka style. Although there is no evidence to back this up, many Jhatka meat-eaters hold this belief.

You can go for any jhatka or halal meat delivery; simply savour every bite!