The Government of India considered having a separate identity card for the voter’s population in India in the year 1993. On the basis of this decision, voter ID cards were issued to all the people who were eligible to cast a vote in 1993.  Since then it is one of the important ID documents that is being issued by the government to the citizens.

This is of paramount importance when you are about to cast a vote in the election. This is a card that would be issued once you reach the eligible age to become a voter or for those already in the eligible voter’s list. The same card has to be used throughout your lifetime and has to be produced at the election booth when you are about to choose the representative to govern you in the state and central level. If you have lost the card or if it is damaged, you should apply for and get a duplicate voter ID card.

When can you apply for a duplicate EPIC card or voter’s ID?

Procedure to get a duplicate voter’s ID card in Delhi 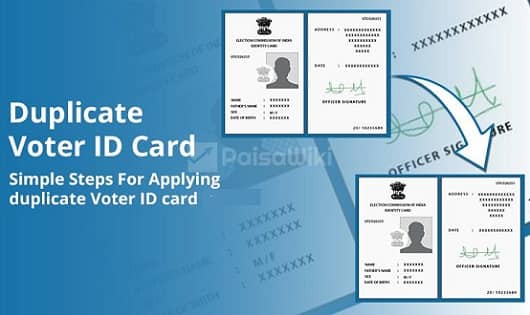 However, you may skip the FIR if you are applying for a duplicate card since it is damaged.

This is a simple way to get a duplicate voter ID card.

The election commission of India has however made the process, even more, simpler by reducing the number of trips you ought to make to the electoral office. They have introduced the online process to apply for duplicate voter ID or EPIC cards. The steps involved are as follows

The online process for applying for duplicate voter ID card

Apply for the duplicate card at the earliest in case you have lost it, it is stolen or torn. Do not postpone.