In the world of sarees, some sarees hold more levels of attention compared to others. One of these is the Paithani saree, which is considered among the royalty in the world of these fabrics.

In fact, this fabric type holds a very special place in the collection of any Maharashtrian bride because it is a perfect symbol for that particular Indian sub-culture. It is also known as the ‘Queen of Silks’, since it was only worn by aristocrats and royals in the past.

What is the history of this beloved saree, and why is it considered as one of the premium quality saree types? In this article, we seek to find out these reasons as well as the things you should know if you are looking forward to buying it.

The word ‘Paithani’ originates from the name of the Aurangabad town known as Paithan. This town is located in the Maharashtra region of India.

The saree itself traces back its origins to around 200 BCE during the Satvahana Dynasty – almost 2000 years ago. There are numerous stories regarding the craftsmanship of people within the city of Paithan all those years ago (it was known then as ‘Supratishthapuram’) in the making of these sarees. Other stories regarding the era of the primeval period state that the Paithani sarees of this time were made using very fine threads of gold and silver.

These fabrics rose in popularity very quickly, although their main peak was during the era of the Mughals. The unfortunate thing was the decline of the weaving industry that was central to the making of Paithani sarees – mainly due to the industrial revolution and the beginnings of British rule. However, the craft was not entirely lost; in the 17th Century, Pesh was decided to actively promote the craft. That led to the decision to make Yeola the main manufacturing centre for Paithani, and the fabric got its life back.

The process of weaving 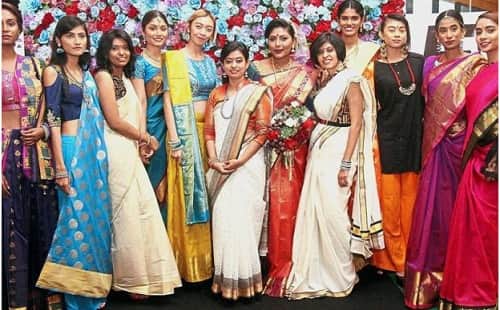 In the early days of the making of Paithani sarees, it used tapestry methods only. The silk threads that were used mainly came from China, as well as zari that was made locally (a combination of silver thread and real gold). These days, the process uses zari from Surat and real silk originating from Bangalore throughout the process.

It is also important to note that genuine handloom Paithani uses 250 grams of Zari thread and 500 grams of silk thread to form a saree measuring six yards. A saree that is longer will also use more material.

The silk threads go through dyeing to kick start the process. The dyes are mostly made of natural materials coming from rocks, vegetables, plants and minerals. The fabric is then transferred to the reels, then the weaver loads it to the loom. The preparation of the loom is considered as the most strenuous part of the entire process, as it will determine the final look and designs of the finished saree.

After loading it to the loom, the weaver then goes through the painstakingly detailed work of making the saree – in fact, the process can be anywhere between a month and even reaching two years. This is because the process requires the highly careful coordination of the eyes, hands and feet.

The weaver will also select a specific colour of thread for the length and another for the width. This makes the finished product have a particular characteristic that other sarees lack – the playing off of light depending on the angle you place it in, making it appear as though it changes colours every time. 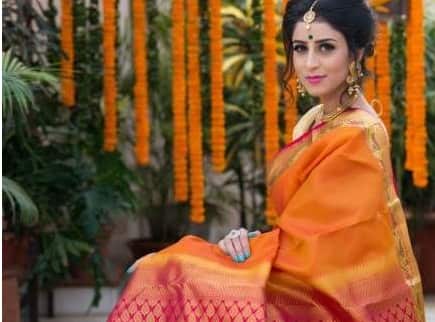 Unlike other sarees as well, you can find the Paithani saree in six and nine yards.  It is easy to recognize the saree as well, thanks to the sides – they look exactly the same. Even the pallu and border. This is especially noticeable when you are looking for the original handloom sarees, as the power loom types reveal threads on their reverse side.

It is also important to note that these sarees never lose theirlustre even after many years, and they never wear out at their folds unlike many other saree types.

The natural dyes that are used in the production process make this saree bear the basic colours only – these include magenta, red, purple, blue, green, yellow, sky blue, and peach-pink. You will also notice the saree containing two dominating colours, one on the pallu and border, while the other is on the saree itself.

Even though the body of the saree always features interesting designs, the most prominent designs are always on the pallu and borders. The most common ones you will find are the bangadi mor (this is a bangle with lotus and four peacocks), mor (peacock), koyari (mango shape), asavali (flowers and vines), Ajanta lotus, akruti (almond shapes) and tota-maina or munia (parrot).

They also commonly feature pankha (fan shapes) and narali (coconut) on their borders, and other designs on the pallu can include musical instruments like tanpura, shehnai, tabla, and sambal. The intricacy of traditional motifs is usually enough; so you will not find many custom designs.

Overall, the process of training an apprentice until they become a weaver is a lengthy one – they are usually introduced to the craft when they are twelve to fourteen years old and they slowly mastered the craft as time went on. 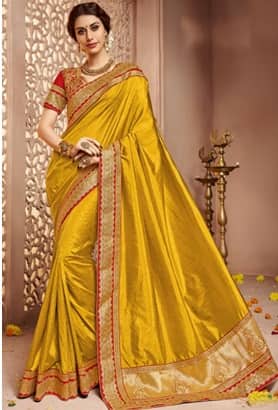 The Paithani sarees of the past were all made from cotton, but now silk is the primary material. You can get handloom silk in two forms – brocade and traditional types. The brocade Paithani requires extra handiwork due to the extensive details in its design, and the fact that its pallu design is 40 inches. On the other hand, the traditional Paithani variety is less intricate and takes a shorter time through the weaving process.

The existence of Paithani sarees is a significant one. They are highly treasured, and have been in great use for thousands of years due to their quality. You can buy them at any store in the country, and even online stores such as Style Caret, all at great offers.

Paresh Patil, He has 3 year experience in IT sector (Information technology). He’s best known for writing science fiction; He loves to write about fashion, lifestyle and technology. Find him on Facebook