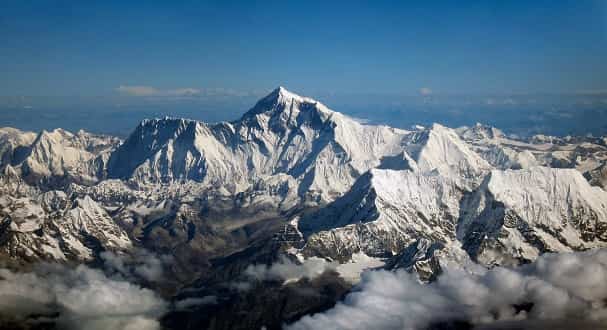 The Himalayan Range is the longest and the youngest mountain rangein India This range intersects the country from the remaining of Asia. The Himalayan mountain range is the main source of huge and vast rivers in India.This highest range translates itself to “home of snow” that is built by the smash of 2 tectonic plates.

The captivating Himalayan range spans an area of around 7200m. This range covers more than a hundred peaks, including Namcha Barwa and Nanga Parbat. The Himalayan Range is considered as the western and eastern point of the Himalayas.

Mount Everest is considered to be the highest mountain peak in the entire world. The height of this peak is around 8848m. It is situated in the Himalayan Range located in Nepal. The Himalayas have also been a prime source of several incredible river ranges that includes the Ganges, Indus, and Brahmaputra.

This mountain range has seen to play a significant role in the regulation of the weather in northern India. This is done by means of prevention of cold air breeze to enter the Indian continent during the winter season.

The Karakoram and PirPanjal mountain range are another two important and popular mountain ranges that are situated to the south and North-west of the entire Himalayan mountain range. One of the interesting things about this mountain range is that it is a disputed category of Pakistan and India. Both these nations have stated their claim over it.

Hindu-Kush is seen to be Karakoram Range’s extension that runs in Afghanistan. Karakoram peak has got the maximum of glaciers that excludes polar regions. The Biafo Glacier and The Siachen Glacier are the world’s second and third largest glaciers that are situated in this range.

The PirPanjal mountain range is situated in the southern region of the Himalayas that starts from Himachal Pradesh. It run still north-west in the direction of Jammu and Kashmir. The PirPanjal mountain range is called as lower Himalayas. Rivers like Chenab, Jhelum, and Raviflow through this range. The Gulmarg city is another very significant hill station that is located in this place.

It comprises of the mountain peak of Anaimalai, Cardomom Tapti and Nilgiris River that marks its start in Gujrat and runs to the Arabian Sea. This peak crosses states of Goa, Maharashtra, Tamil Nadu, and Karnataka.

Anaimalai Hills is situated at an elevation of around 2695m. It is the highest mountain peak of this range in Kerala. Western Ghats is rated as the UNESCO World Heritage website. You can find a great bio-diversity in this range. It is the abode to 139 species of mammals, 508 species of birds, 179 species of amphibians and 250 species of reptiles. Some of the famous tourist attractions are Jog falls, Bandipur National Park and Ooty. Some of the important rivers present in this range of mountain are the Godavari, Kaveri, and Krishna.

Eastern Ghats range is comparatively smaller in size as compared to the Western Ghats range.It runs in the eastern region of the Indian Peninsula. The Eastern Ghats is a non-continuous range that has a low elevation as compared to the Western Ghats. It runs via states of Orissa, West Bengal, Tamil Nadu, and Andhra Pradesh. Arma Konda is a mountain peak that lies in this range with an altitude of 1680m. It is considered to be the highest mountain peak in this region. The Eastern Ghats play an important role in agriculture. The four major rivers namely, Godavari, Krishna, Kaveri, and Mahanadi fall in the Bay of Bengal via the Eastern Ghats.

The Eastern Ghatsare older as compared to the Western Ghats. Also, these Ghats have been home to some of the popular pilgrim sites such as Tirumala Venkateshwara Temple. Bhubaneswar and Vishakhapatnam are two important cities that are located in the Eastern Ghats.

The Purvanchal Range is also called as Eastern Mountain Range. It is considered as the expansion of Himalayas towards the eastern region of India. It comprises of three parts i.e., The Garo-Khasi-Jaintia Hills, The Patkai-Bum Hill, and the Lushai Hill.Mawsynram mountain range covers the eastern Indian states and is known as the 7 sisters.

This mountain range is located in central India. Both of these mountain ranges are seen to travel parallel to one another.The length of the Satpura range is more than the Vindhya range. Satpura is the main river source like Tapti and Narmada.Both Vindhyaand Satpuraruns between Maharashtra and Madhya Pradeshwith an extension to Chattisgarh, Uttar Pradesh, and Gujarat.

Kalumar Peakand Duphgarh are two highest peaks located in Satpuraand Vindhyarange.These mountain peaks are popular for a large number of tourists. There are several other places of attractions that entice tourists to this place. These are Kanha National Park, Panchmarhi Hill Station,Omkareshwar temple and Amarkantak.

The Aravalli is the oldest range in not just India but also of the world. Itswidth ranges from 10kms to 100kms.This range spans a length of 800 km, that covers the states of Haryana,Delhi, Gujrat, and Rajasthan.Aravalli Range affects the climate by blocking the wind that carries rain to the Thar Desert.

One of those things that makes India spectacular is its remarkable mountain ranges. This is a diverse land in the world where the credit of its diversity goes to its rich fauna and flora. Hope the above article would have educated you about the mesmerizing ranges of mountains in India.