The railway network in India is huge and it reaches all the places where there is lack of air connectivity. It is known to be the fourth largest rail network in the world which has a total network length of around 67368 kilometers. The network is upgrading slowly and it is being electrified so as to ensure that the dependency on diesel power engine is reduced to zero. As per the statistics, there are over 20,000 trains that run daily across the country and in India, there are over 7349 stations as well. Indian Railways also play a major role in transporting food and more than 9,200 goods train run on a daily basis.

Apart from the information mentioned above, it is known that more than 8 Billion passengers travel on Indian railways on annual basis and the railways also help in transportation of over 1.1 Billion tons of goods on annual basis. Lastly, Indian Railways is also one of the largest employers in the world with over 1.308 million employees.

India has some of the highest and the longest bridge in the country and in this article, we are going to talk about the top 10 longest railway bridge in India in. Let us have a look at these 10 bridges which are the longest one in India.

This is a popular bridge in India and it connects Naihati to Bandel in Calcutta. The bridge is known to help the rail in crossing the Hooghly River and it is also one of the oldest bridge in India. As per the information available, there is a new bridge being constructed just adjacent to this old bridge. The name of this new bridge will be Sampreeti Bridge. It is surely a great attraction in West Bengal.

Next on the list is Zuari Bridge which is located in Goa. The bridge is located across Zuari River and it has a total length of 1.319 Km. in addition to this, it is known that this is one of the longest bridge in Konkan Rail Network. The natural scenic beauty of Goa adds on to the beauty of traveling on the bridge. In addition to this, the bridge is quite an important one as it connects Maharashtra, Karnataka, and Goa.

On number 8, we have Sharavathi Bridge which spans across the length of 2.060 Kms. The bridge helps the train in crossing the Sharavathi River which flows in Karnataka. The length of the bridge along with the river makes it really attractive for the passengers. There are many trains that pass over this bridge on a regular basis.

There is something mesmerizing about the sea bridges and this is the second longest sea bridge in India. The bridge has a total length of 2.065 Km and it connects Rameshwaram to the Indian mainland. For those who do not know, Rameshwaram is an island in India which is located off the coast near Tamil Nadu. The best part is that the Pamban Road Bridge runs parallel to this railway bridge which allows the car to pass from one end to another.

There are two Mahanadi Rail Bridge in India and both are located in Orissa. As per the information available, the first bridge is located near Bhootmundei and the second one is located near Cuttack. The one near Cuttack is the one we are talking about here. You must certainly visit Mahanadi Rail Bridge to enjoy the thrill of a speeding train passing over the gushing water of the river.

This bridge is a decommissioned bridge but the structure is still there. It has not been demolished yet and the total length of this bridge is 2.7 Km. as per the information available, the Godavari Bridge replaced the Havelock Bridge and now it has been replaced again.

The third longest bridge in India is Nehru Setu Bridge which has a length of 3.059 Km and this bridge is located in Bihar. The bridge runs over Son River in the state of Bihar. The bridge runs from Dehri-On-Son to Son Nagar. Moreover, the Nehru Setu Bridge is known to be a river road bridge which means that the parallel road runs across the bridge to help with road transportation.

Next on our list is Vembanad Rail Bridge which is 4.62 Km in length. It used to be the longest bridge in India until Bogibeel Rail Road Bridge was announced. No passenger train runs across this bridge as only goods train are allowed to pass over the bridge. Apart from this, we also know that the bridge across Vembanad Lake. 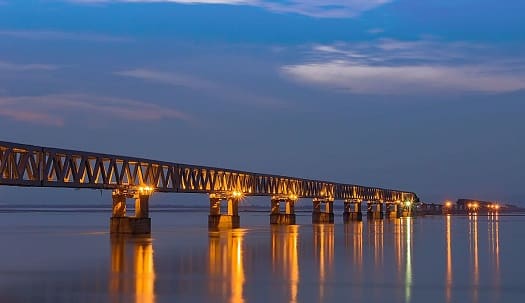 These were some of the longest railways bridge in India where you must take a train to. They are a great attraction and they even offer scenic beauty to the passengers.

You must surely plan a solo trip or a trip in a group to witness the beauty of these places.