Cooking is always a good habit. If we look back it will be seen that during the early days cooking was done with the help of oldest technologies. What is the main motive of cooking? Cooking is done to kill the germs. However, with the help of advanced science and technology, new things have been introduced. The modern techniques are good and better. During the 20th century ingenious inventors came up and they made the process of cooking easier among the people. If we see microwaves it will be found that they use radio waves to cook the food quickly and efficiently.

What is the meaning of induction?

The introduction of an induction cooker has benefitted people in many ways. They can easily cook the food even without using a lighter. It is operated with the help of a switch. It helps in the hassle-free cooking process.

How an induction cooktop does operate? 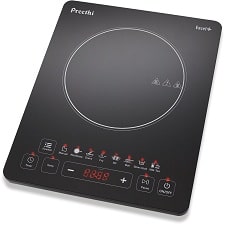 An induction cooktop is similar to ceramic cooktops. It has some distinct zones where the user can keep the pots and plates. The cooking surface or area of the cooktop is made from tough ceramic glasses.  Each of the cooking zones comprises of wound coil of metal. The moment the power is turned on the current flows through the coil and generates an invisible and highly frequent magnetic field.

Until and unless there is a pan on the cooktop no such heat is produced or can be felt. The cooking zone remains cool. Then place the pan on the cooking top and the magnetic field generated by the coil penetrates into the iron. What does the magnetic field produce? It produces electric currents inside the pan and turns into a heater. The heat from the pan now flows and transfers into the food that is being prepared. If there is water inside the pan it will also get heated within a short passage of time.  It can be rightly said in this context that a copper or an aluminium pan will not work properly in the cooker until they have additional layers attached on the bottom that are magnetic.

The eddy current flows through the top and heats the vessel on the device. Eddy current is a type of current that is circulated in the conductors and has been induced in the conductor with the help of the magnetic field. They can easily heat the metal device even without touching it. These types of currents are mostly available in energy meters or speedometer. The eddy current comes with a wide variety of uses. They are used in various fields. Thus, the demand for induction cookers is gradually increasing in the present world.

Induction cooktops come with a lot of advantages. Let us discuss some of the noted ones.

Gone are the days when people could spend a long time in the kitchen. With the introduction of induction cooktops, this problem can be resolved. One can sit under the fan and prepare the food. It is better and nice in all respects. However, all companies have produced induction cookers with various features and advantages. Buyers can buy as per the budget and requirement.