Pandya Store is a family drama television show on Star Plus. The show was released on 25th January 2021. Sunjoy Waddhwa is the producer of this show. Pandya Store is being telecasted under the banner of Sphere Origins. The lead roles of the show are Kinshuk Mahajan and Shiny Doshi.

Pandya Store is a Hindi remake of a Tamil show named Pandian Stores,which was produced by Star Vijay. The show has been successfully telecasted a total of 286 episodes till now, and more episodes are yet to come. Here is the story, cast names, and the timings of the show. 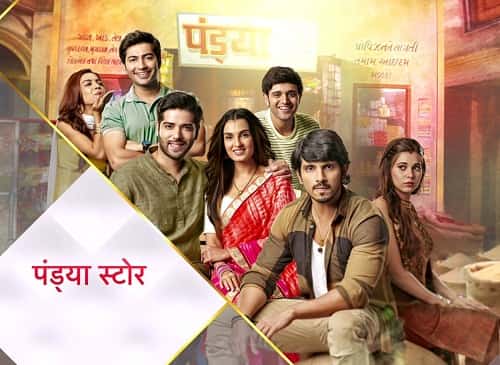 Dhara is Gautam’s wife, and the younger brothers of Gautam treat her like their mother. But Dhara’s mother-in-lawdoes not accept her in the beginning. Later,her mother-in-law accepts her after so many troubles.

The only source of income of the Pandya family is their dearest PandyaStore. The family completely depends on this store for their daily life.This way, the Pandya family lives a simple life in Somnath. Then the show took a leap of ten years.

After ten years, the younger brothers of Gautam have grown up. They still have respect for their sister-in-law, Dhara. Then the story takes a twist and creates some circumstances,because of which Shiva and Raavi get married although they don’t want to. But later, they start loving each other. On the other side, Dev and Rishita love each other and marry.

Pandya Store is telecasting from Monday to Saturday at 11PM on Star Plus. The running time of the show is 20 to 24 minutes. Before, the channel was telecasting Lockdown Ki Love Story in this time slot. Pandya store is also available on Disney + Hotstar OTT platform. The first episode of this show was telecasted on 25th January 2021.

Let’s now know the cast names of the PandyaStore show.

He plays the role of Gautam Pandya, who is the eldest son of the Pandya family. He is Dhara’s husband and the eldest brother of Dev, Krish, and Shiva.

Shiny Doshi is Dhara Pandya in the Pandya store show. She is Gautam’s wife and Hardik’s sister. Dev, Shiva, and Krish are her brother-in-law. Suman is her mother-in-law in the show.

He works as Shiva Pandya in the show. He is the younger son of the Pandya family and Raavi’s husband.

Akshay Kharodia plays the role of Dev Pandya in the show. He is the younger son of Darshan and Suman and Rishita’s husband. Gautam, Krish, and Shiva are his three brothers.

Krish Pandya, who is the youngest son of Darshan and Suman,is played by Mohit Parmar. He is Kirti’s friend and the youngest brother of Gautam, Dev, and Shiva.

She plays the role of Raavi Pandya,who is Shiva’s wife. She is Suman’s daughter-in-law and Gautam, Dev, and Krish’s sister-in-law.

Simran Budharup is Rishita Pandya in the show, who is the daughter of Kalyani and Janardhan. She is Dev’s wife and Kirti’s sister. Suman is her mother-in-law, and Gautam, Shiva, and Krish are her brother-in-law.

These are the main cast of PandyaStore.There are also many recurring and guest casts available.