Brandy is amongst the favorite drinks among discerning drinkers around the world, which is revered for its unique flavor derived from age and quality of the amazing drink. Brandy, which literally means “burnt wine” in Dutch, is created by distillation of fermented fruit juices by aging them in oak casks. The drink gets its distinctive color from the caramel added to it or because of the casks in which it is stored.

Advantages and Disadvantages of Brandy

Let us now read the advantages and disadvantages of consuming Brandy.

Now that we know the advantages and only disadvantage of Brandy it is safe to say that one cup of brandy every day keeps the doctor away. Since it is an alcoholic drink, one must not overdose on it. Simply consume the needful amount of brandy to keep your health in check and enjoy a blissful life with the safe and secure body.

The Indian market today, has a large variety in beer brands, which are adjudged on the basis of their age, quality and price.

This is a brandy with a special blend of flavor of fruits which had made the brand favorite of all the age groups and gender. It is being liked by everyone in the parties for its different texture and taste. The taste of the fruits is simply great and makes it more appealing to have it. One could not hold oneself after having one glass of it. It is one of the most affordable and fine liquor to serve on the parties. This brandy is made after doing the proper ageing of it which makes it finer for its lovers.

This brandy is made in France. The texture of it is aromatic and it makes the person feel on the top when it takes them due to the richness of the fruit-flavor. This is the reason it is so much osn the demand during the parties, events and functions. It is one of the finest brandy known in the world and is used often for the parties. It is being imported all over the world to have them. It is one of the top class brands and is highly sold among all.

This brandy is of the Beam Suntory Group. The French label which lies on it, takesus back to the Napoleon time. The barrel on it is handmade from the best of the craftsmanship. It is being consumed by varied customers of different age group and is known best for the celebration parties due to its unique style. It is being used in the entertainment industry for the purpose of popping.

This is the French brand made on the location of Cognac which is known to be the heart of France. It is made from the high quality of grapes that are grown in the region of Cognac on its rich soil. The specialty of them is to keep them till they complete the age of 10 year and maximum up to the age of 37 years. It has the awesome taste. An awesome logo is there on its bottle with the golden color which is its uniqueness and shines to tell that it is the supreme of all.

This is made by the company Richard Hennessy. It is one of the best selling brands of Cognac. It has the rich combination of cognacs and then sorted in a fine manner. It is known to be the best of all, the Cognacs brand.It has the best of flavor which no other brand could beat. This brand is known all over the world for its continuous reputation and quality of taste from long time. This brand has its own authentic taste which no other brand could have. 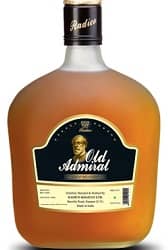 One of the best selling brandy brands in India is Old Admiral, which is the product of the New Delhi based manufacturing company called Radico Khaitan. The sales figure of this brand in 2010 crossed a whopping 2.99 million cases, which witnessed an increase of 65.2% since the previous year.

With a sales figure of 2010 reaching up to an incredible 3.4 million cases, the Italian brand called Dreher features next on the list of top 10 best brandy brands in India. The production company which brings this brand is Gruppo Campari, which is based in Milan. It registered an overall growth of 1.4% in its sales since the year 2009. 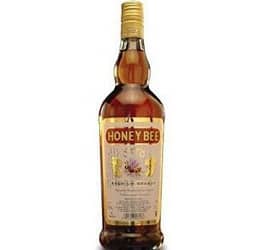 Another popular brandy brand in India is Honey Bee, which belongs to a company called United Spirits, which has its headquarters in Bangalore. The brand witnessed a phenomenal sale of 4.37 million cases in 2010, which added up to an increase in the sales by 21.4% as compared to the previous year. This means that there has been quite a considerable boom in the sale of this brand of brandy in the country.

Featuring next on the list of top 10 best brandy brands in India is the market leader called Mansion House Brandy, which belongs to a manufacturing company called Tilaknagar Industries, which has its head quarters located in Mumbai. The total sale of this particular brand in India in the year 2010 reached a figure of 5.38 million cases, which accounted to an increase of 35.9 % in comparison to the sales figure of the previous year. 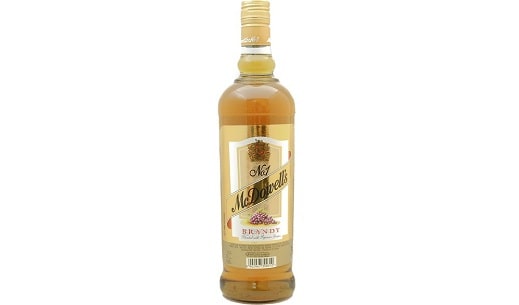 The undisputed leader among the brandy brands in India is the brand called Mc Dowell’s No 1, which has its stronghold in the Indian market since a long time. A product of the Bangalore based company called United Breweries, popularly known as UB. The brand of brandy recorded a total sale figure of 11.54 million cases in the year 2010. This amounts to an increase of 25.2% in the sales figure when compared with those of the previous year. Technically speaking, Mc Dowell’s No 1 has as much as 51% of share in the Indian market, making it the most popular brandy brand in the country.

All these brandy brands are held in high regard in the country, a fact reinforced by the booming sales figures of all of them in 2010 and this growth trend has been continuing over the years.

Brandy is a kind of spirit drink which is manufactured from grapes as well as the distillation of wine & then matured in wood barrels, thus its nobility.

1 liter of Brandy is produced by distilling around 3 liters of wine (or four kilogram’s of grapes). Two liters of the wine are thrown away after the finest has been taken out.

Flavoring cocktails and sweets like crepes Suzette and cherry jubilee, they also serve as the fuel for the blaze in meals like those. Brandy is the foundational ingredient of yet another category of distilled spirits: liqueurs.

The fruit must be fermented before it can be used to make brandy, a kind of distilled liquor. Brandies may be made from a wide variety of ingredients, the most frequent of which being grapes.

Brandy is made by fermenting grapes into wine; however modern techniques of production might differ from area to region. The alcohol and taste of the wine are then concentrated by distillation at a low temperature. Several times of distillation may be necessary for certain brands of brandy.

A glass of brandy has zero carbohydrates since it contains no sugar and no fiber.

An after-dinner digestif, brandy normally ranges in alcohol content from 35 to 60 percent by volume (70 to 120 US proof). Wooden barrels are used to mature some brandies.

Brandy has a long history of medicinal use, including for treating respiratory conditions, regulating appetite, and delaying the onset of old age.

The sleep-inducing properties of brandy have been scientifically confirmed, and moderate use has been shown to have positive effects on sleep quality. Brandy has been shown to improve heart health and maintain healthy cardiac function.

Not quite, as people having diabetes should be very careful while in taking any type of alcohol.

Brandy is a Dutch word which literally means Burnt Wine, but trust me in this when I say that Brandy does not taste like burnt anything! This is one alcoholic drink that we have been hearing ever since we were little. Even though Brandy is a product made from classic red wine, yet it is aged in oak barrels and takes up its heavenly flavor. This entire process increases the alcoholic content in brandy by heating and later, aging them in oak barrels.