This television series, created by the Picturez of Rohit Shetty in partnership with Discovery Kids & Reliance Animation, is based on the Indian animated character Little Singham. This was the first time it aired on Discovery Kids, which had recently undergone a makeover, on April 21, 2018.

In it, we see Bajirao Singham as a child, fighting criminals, zombies, and dangerous mutants to save his city from destruction. It consists of three seasons and 366 episodes, as well as numerous movies. 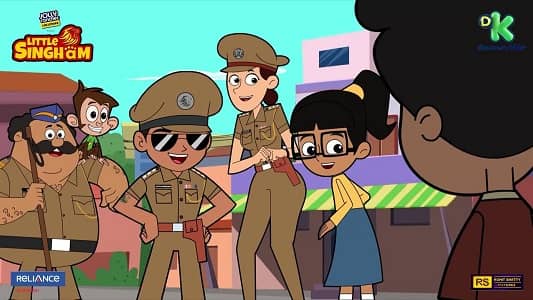 Little Singham: He is the central character of the show & the defender of Mirchi Nagar. He is also the youngest of the main characters. He’s dressed in a police uniform with black sunglasses on his face. With the help of the Panja Attack, he protects the people of Mirchi Nagar from various threats.

Rocky Cheetah: He is a villain who is half-human, half-cheetah, and fights against Little Singham.

Teacher Tara: She is a reading, mathematics, and chemistry teacher at Mirchi Nagar City School in Mumbai.

Ajay: He’s a brave young man, and he calls himself Little Singham.

Lattu and Babli: These characters are self-proclaimed assistants to Little Singham.

Babli-She is a bright young lady who is the daughter of Prof. Avishkar. She refers to Ajay Hero as a “hero” on occasion.

Commissioner Faulad Singh– He is a police officer who is distinguished by the wearing of a turban.

Professor Avishkar – He is Faulad Singh’s senior scientist, and when the problems are severe, he develops devices for Little Singham, Lattu, Babli, and, Chikki, to help them.

Montu– He is a chubby young man who is a rival of Babli, Lattu, and, Ajay

Inspector Kavya– She along with Little Singham, is a police inspector in Mirchi Nagar, Bangalore.

Hawaldar Karate– He is a sergeant of Little Singham. He is a black belt in karate.

Mantri Ji (Prime Minister): Mantriji is the PM of Mirchi Nagar & is dressed in pajamas and glasses.

Kallu and Ballu: They are the burglars of Mirchi Nagar who are also some of the most likely suspects in the country.

Chef Chao Chao Khao: He is a Chinese chef who is the bad guy of Mirchi Nagar.

Shanta Nani: She is a chef in the Mirchi Nagar neighborhood.

Misti Aunty– She is a rambunctious lady from Mirchi Nagar who makes a lot of noise.

Komal– She is Mantriji’s daughter, and she is the main character in the film. Little Singham is a favorite of hers.

Little Singham is a fun and interesting animated show through which your kids can learn various lessons and can smartly master how to tackle small issues like Little Singham.