As the name suggests, Chhota Bheem is an animation series based on the adventurous stories of a brave child named Bheem. The story mainly runs around Bheem and his friends in the fictional city of Dholakpur in northern India. Chhota Bheem name is derived from the name Bheem, from the character of an Indian epic ‘Mahabharat’. Bheem of the Mahabharat is a strong man. Now Bheem is also synonymous with the strongman.

Along with the Chhota Bheem, there are some other important characters are there in the series. Their role in the cartoon and cast is mentioned below. 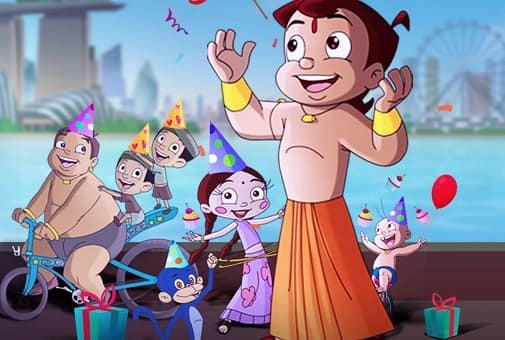 Bheem is the main character of this cartoon. Bheem is a brave, intelligent and strong kid in the story. The age of the Bheem in the animation is about 9 years. In the stories, Bheem solves the problems of the villagers and king. Thus, Bheem is so popular in the village. The source of Bheem’spower is “Laddu” an Indian sweet dessert.

Sonal Kaushal is given her voice to the Chhota Bheem. She gave her voice very practically, no one can imagine that this is not of a male.

Chutki is Bheem’s best friend. She is a young girl and the only daughter of Tuntun Mausi. Tuntun Mausi is the character, who has the laddu shop in the village. Laddu, the source of the power of Bheem is prepared by Tuntun Mausi. Chutki is the leading female role in the story. The Voice of Chutki is given by the Rupa Bhimani.

Raju is a little boy from the same village. Raju is a role model in the series. He is a funny, courageous and loving boy. He is just a 4-year-old boy. His braveness is so more than the age. This braveness has come from his father, who is the Senapati of the king’s army. Julie Tejwani’s voice is as the Raju.

Kalia is a very big and muscular child, who bully other children. Kalia is a normal boy, who feels jealousy from the Bheem. Kalia has two child followers, namely Dholu and Bholu. They also are the main character of the Chhota Bheem. Sabina Malik Mausam, a female artist given her voice in the Chhota Bheem as Kalia.

Dholu bholu also the funny charactres in the chhota bheem show. Dholu Bholu are twins and casted by the Jigna Bhardwaj.

Raja Indraverma is the king of Dholakpur village. And is the father of princess Indumati. He is a very brave warrior and won many times in the wars. He has a big army to protect the village. Bheem is also a member of the army of Indra Verma. Rajesh Shukla is a male artist, who given his voice to the Indra Verma.