Pakhila and Thakela are two wonderful assistants of Bhootboss. And they always go after the criminals and punish them. Both these assistants live up in the sky and watch the entire Earth for any crime and criminals. They have Paap-O-Meter or it is also called a meter of sin.

Pakhela & Thakela make use of buttons to find out sins made by the human beings on Earth. Bhootboss only enters into the scene when the situation goes out of control. 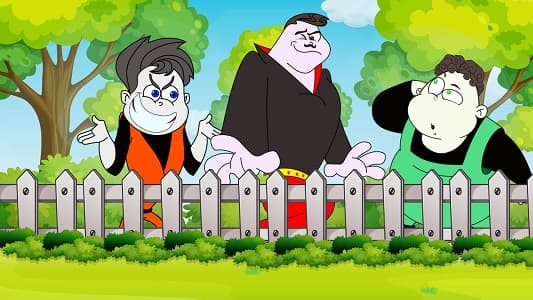 Discuss about cartoon characters of this weird comic serial that makes the kids laugh & enjoy.

He is a man of 35+ years of age. He is a gentleman and a very sincere person.  He is appointed to find the amount of sin on the earth. He makes use of a Paap-O-meter that helps in calculating machines committed by the people on the earth. He is called Bhoot Boss and he is in charge of Thakela and Pakhela – who were his assistants. The Bhootboss always fights against the criminals and the people who cheat others. You can watch the episodes to know more about him.

Pakhilais a 16 year old boy who is very lazy at work. He works as an assistant of Bhootboss but he also has an assistant called Thakela. He always looks for an opportunity to fight and beat his assistant Thakela but he misses the opportunities most of the time. In the episodes sometimes he gets gunned down while saving the people or the children from the hands of criminals. One such incident happened in Brazil in episode number 7.

Thakela is another assistant of Bhoot Boss. He is also a 16 year old who only loves to eat & sleep. His only dream is to sleep for long hours after having a good meal. You can see his love for good food in many episodes that will make you laugh.

The sinners are the people who keep committing crimes on the earth. Bhootboss makes plans to catch and punish the sinners who are found guilty.  Bhootboss with his assistants always keep track of the sinners in the episodes.

He is also an assistant of Bhootboss in most of the missions whenever he gets a chance. He is very funny with an extraordinary sense of humour that makes you enjoy the episode. In a tragic incident Hatela was shot down by Bhootboss’s wife in an episode. The role of Hatela remains irregular in the serial.

The cartoon characters of the serial are interesting and very funny. The characters and their names are weird but easy to remember. The story of this serial has become popular among the young and old people.