Himachal Pradesh is located in the Western Himalayas and is one of the favourite tourist destinations in India. This mountainous state is surrounded by valleys and mountains, through which many perennial rivers flow. Also called Devbhoomi, which means abode of the gods, Himachal Pradesh is known as the fruit bowl of the country, which has extensive orchards.

The mesmerizing views, the enchanting snow-capped mountains, harmony in the environment, freshness in the air, and the lush green valleys are witness to the beauty of Himachal Pradesh. Besides, the food of Himachal Pradesh is something that you must try.

List of Traditional Food of Himachal Pradesh that you absolutely can’t miss: 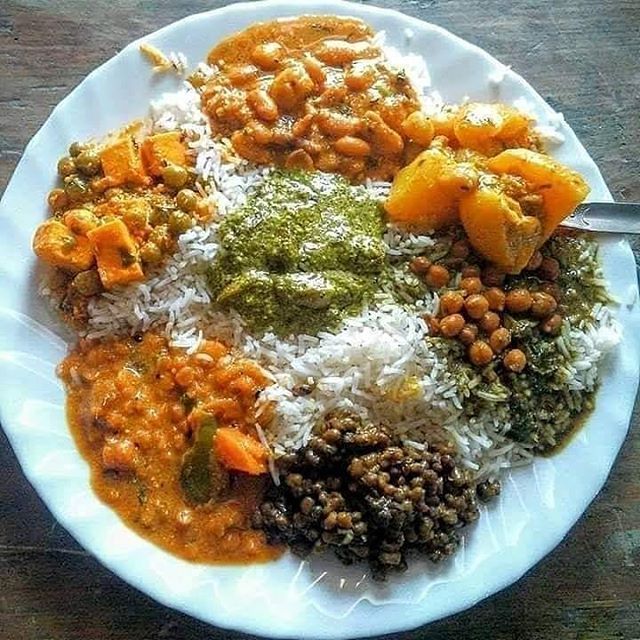 Besides being delicious, Dham or Dhaam is also loaded with nutrients. This authentic food is popular in Chamba and Manali. It contains a variety of ingredients, such as boor ki Kadi, Rice, Dal, Rajma, Curd, and Jaggery. This extraordinary traditional food is loved by the tourists visiting Himachal. At popular restaurants of HP, this cuisine is cooked by Botis, called expert chefs. Since this nutritious thali consists of delicious dishes, it is a must-serve during events, weddings, and occasions.

In most Himachali households, Spicy Lotus Stems which are known as Bhey cooked well. Since the basic ingredient is lotus stems, they are chopped and sliced well and then prepared in ginger, gram flour, and onion. The dish also requires a few spices to be prepared, such as chilli powder, turmeric powder, cayenne pepper, and coriander powder.

Babru is commonly eaten in Shimla and is one of the popular traditional foods of Himachal Pradesh. Babru is the same as Kachoris in appearance and serves as a delicious snack to be had with tea. The main ingredients that are used to prepare this special cuisine include black gram and wheat flour. Being the traditional food, it can be found easily at numerous popular restaurants in Shimla. You can also try it with tamarind chutney to lift your taste buds.

Another delicious yet popular food of Himachal Pradesh, Siddu is prepared from wheat flour. It can be commonly served with vegetables or mutton in the main course. Unlike other traditional food of Himachal Pradesh, Siddu takes a lot of time and effort to be prepared. Firstly, the dough has been prepared using sugar, salt, wheat, yeast, and ghee. Then, this finest dough contains fillings with chopped & crumbed almonds, walnuts, and poppy seeds individually into a smooth paste. Then, these round dumplings are put on the direct flame until they get half-cooked. Then, they will be allowed to steam for at least 15 to 20 minutes. In different parts of Himachal Pradesh, Siddu is served in local restaurants.

The traditional dish Aktori is popular in Spiti and Lahaul. In addition to this, this dish is made in the Spiti Valley and is often enjoyed and prepared across the state. This traditional cuisine is fairly served during occasions, celebratory events, and festivities. It shares its appearance with pancakes or cake. The primary ingredient of Aktori is buckwheat leaves that are cooked in wheat flour using sugar, milk, baking soda, and water. After eating this dish once, you will feel like eating it again and again.

The list of traditional food of Himachal Pradesh is incomplete without this non-vegetarian dish. Majorly famous in Kullu, Trout Fish is cooked with marinated trout fish, along with minimal spices to offer fish organic flavours and taste. This nutritious cuisine is typically served with numerous boiled vegetables. If you are a fish lover, you must try it. There are several ancient, as well as newly established restaurants that serve this dish.

Mittha is one of the wholesome traditional cuisines served across the state. Speaking of the preparation of Mittha, it is a dessert prepared using ingredients like rice, dry fruits, and raisins. It is primarily serving on special occasions or events. The taste of this sweet dish is so amazing that you will be craving to eat more.

Kaale Channe Ka Khatta is the flattering food of Himachal Pradesh. It is popular across the state and served with Madra (Wine or beverages). This mountain dish can be also served with rice and sour & spicy tastes. Talking about the preparation of Kaale Channe Ka Khatta, it is prepared with black chickpeas, and numerous other spices, such as fennel seeds, tamarind powder, asafoetida, mint powder, wheat flour, cumin seeds, salt, coriander powder, etc.

Associated with Chamba, Tudkiya Bhath is different from regular pulao. It consists of ghee, rice, potatoes, lentils, yoghurt, spices like bay leaves, cardamoms, cinnamons, and vegetables like ginger, tomatoes, garlic, and onions. You can serve it with lime juice and mash dal.

If you plan a trip to Himachal Pradesh, besides captivating eye-catchy sceneries, don’t forget to eat popular traditional food.