The northeast state, Nagaland has rich culture & customs, even diversity in costumes. The populations of the region give a lot of importance to their traditions, costumes, culture which makes them popular.

The traditional costumes of the state are very colourful, elegant, and attractive but they are varying from the other states of India. Nagaland is home to some of the grooviest animals and plants; also it is rich in flora & fauna. The falcon Capital of the world, Nagaland carries a colourful tribal culture. As per the 2011 Census, the state is home to 88 % Christian, Islam, Hindu, Jainism, Naga folk, and Sikhism religion.

Out of which, Naga’s have known for their traditional art of weaving by knitting spectacular design and vibrant colours used to produce shoulder bags, shawls, tables, mats, etc. Fabric and metals are not only part of craft but also comprises bamboo works and wooden carvings. People of Nagaland wear colourful but elegant costumes that represent their customs and culture.  Here is complete information about the traditional dress of Nagaland men and women. 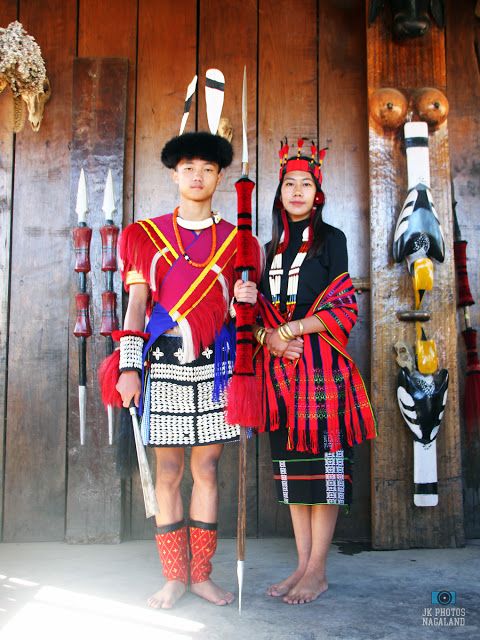 Traditional dress of men in Nagaland:

Alungstu is one of the essential traditional costumes for the men of Nagaland, worn by wealthy men. This dress personifies success and prosperity.The clothes used in this dress have flowers on them and are yellow. Alungstru’s designs have been created by the local people living in the area.

Along with a shawl, Kilt is the attire worn by men in Nagaland. It is black and has been complexly designed with cowries. The man who uses this cloth only sews it. On the top of the cult, there is a cowry, which is a symbol of success used in war.

Traditional dress of women in Nagaland:

AzuJangup Su is a type of skirt, has yellow and red stripes on it. Nagaland women have worn it during occasions, functions and festivals

This is also a traditional dress of women belonging to Nagaland. It has a unique design similar to a petticoat. The distinctiveness of Neikhro is fabricated in the pattern and colour of these attires.

Moyer tusk is a simple cloth generally made of dark blue fabric. This costume has a band with criss-cross patterns at the end of the cloth.

Nagaland women also wear jewellery that is made from a wide range of materials such as glass beads & carnelian, boar tusks, coral, bronze, conch shells, shells, ivory, and cowries. They often love to wear jewellery that has a combination of red, yellow, blue, green, orange, and bronze colours. The neckpiece is natural and multi-stranded which is easy to wear in routine life or occasionally.

The culture and costumes of Nagaland differ from each other but are elegant and sophisticated at the same time, which makes it popular.