Jammu and Kashmir is a heavenly place on earth. The people of this land are as beautiful as the land. You will get to view many new places in this state. Apart from this, the traditional dress of this state is elegant and beautiful at the same time. Although you will get people wearing modern dresses, still most people prefer wearing the formal dresses and attires. This enhances their look to a great extent. If you are in this place, you should try this state’s traditional and ethnic dress.

Traditional dress of men in Jammu and Kashmir:

Jammu and Kashmir have a good number of Hindu and Muslim people. Each of them has a separate set of costumes.

Most men in this state prefer to wear Pehran. It is a long and loose gown made of heavy quality fabric. It hangs down till the knee area. Men wear a skull cap with this attire. It is tightly worn on the cap. Pehran is worn with a salwar. This is the primary dress of the state.

Most Muslim men wear a cap on their head. In case of Hindu men, they wear a pagri. The Kashmiri men also wear turban. It is worn by the Kashmiri Pandits.  The priest men of this class wear turbans in Namdhari Sikh style.

People who live in the hilly regions are known as Gujjars. They wear the same gown type dress.

They are another class of people noticed in this state. Dogra men wear tunic-like a dress with a better fitting. They also wear kurtas and pajamas. However, turbans and kamarbands are found among the older Dogra people. 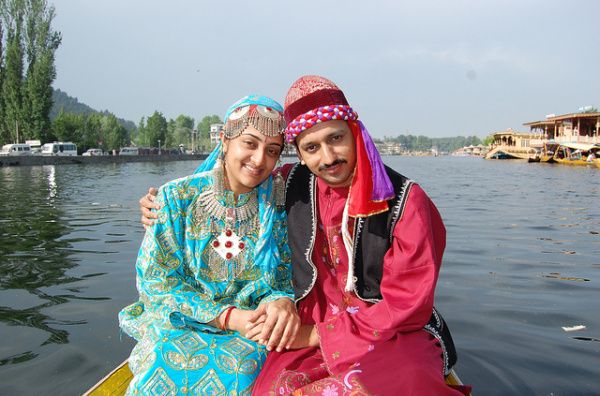 Traditional dress of women in Jammu and Kashmir:

It is the typical dress observed among Kashmiri women. It has broad sleeves. The dress has zari and embroidery works on the body part. Some of them have pockets. These are the common feature of the Muslim women dress.

Headgear is one of the common things worn by women’s. Women wear red color headgear on their heads. This makes their look much beautiful. Red headgears are also known as Kasaba and Abaya. This is worn by the Muslim womens. Unmarried Muslim girls wear a skullcap. It is decorated with embroidery works.

Gujjar womens wear similar dresses as worn by Turkish women in their villages. Their dress looks like tunics

Women in Jammu and Kashmir prefer to wear earrings. They like wearing bunch earrings. However, most women are found wearing silver jewelries. It is common among them. Most Muslim women adorn themselves with bracelets, necklaces, and bangles during the wedding seasons.

Jammu and Kashmir have always been the best tourist destination for the people. If you come to this place, you must try their traditional attires and cultures. Kashmiri dresses are elegant and unique at the same time.