As you know that clothing is a vital element of our existence as well as the culture, the dresses symbolize our heritage and teach us more about its richness of it. Many academics used to investigate the clothing culture of a certain cast or race to know further about them.

So, we are going to explore some of the clothes of Himachal Pradesh which everyone ought to try.

It is usually believed that the Himachali folks are separated into 2 ancient classes – the Brahmins and the Rajputs. 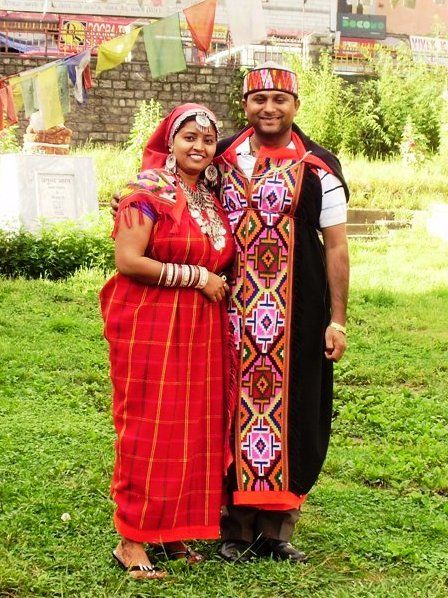 The men dress in a long Kurta with a Chudidar Pyjama that is tight around the ankles. They cover it with a long silken garment that is draped over it. Yak leather is used in the production of clothes in the area since the animal is so prevalent. In order to achieve this look, golden threads & embroidery are used to decorate yak leather overcoats. It aids in keeping them warm throughout the hard winter cold.

The turban which is a long fabric worn around the head serves to protect their heads from the elements. These are bright and colorful, and they are often starched to keep them rigid. Rajput men can wear turbans and grow their mustaches long as a statement of their pride in their heritage and culture.

Long Kurtas are worn by men over dhotis. They also dress in a long overcoat or waistcoat & put a turban on their heads to keep their heads covered when out in the field.

The ladies are dressed in long dresses that cover them from their necks to their feet. In the form of a Kurta, it is worn over a loose salwar or a skirt-like outfit, depending on the occasion. They also wear Ghagris and Cholis, which are referred to as shirts or blouses. One of the other outfits they choose is the classic Salwar – Kameez combination.

Besides this, they also dress in Ghagras and Cholis (also known as shirts or blouses), which are worn over long loose-fitting pants, as well as the traditional Salwar-Kameez, which is a long fabric that is worn over the dress and over the head. On the occasion of important festivities or festivals, they dress in materials that have beautiful embroidery on handwoven fabric, as well as other unique materials. Bangles and rings are also often seen on the nose, fingers, toes, and neck of the wearer, among other body parts.

As a result, when it comes to portraying the cultural viewpoints of a certain caste or state, the garments are quite important. These may vary depending on where you live and what you do. What you all need to do is make an effort to appreciate everything you come across in your daily lives.